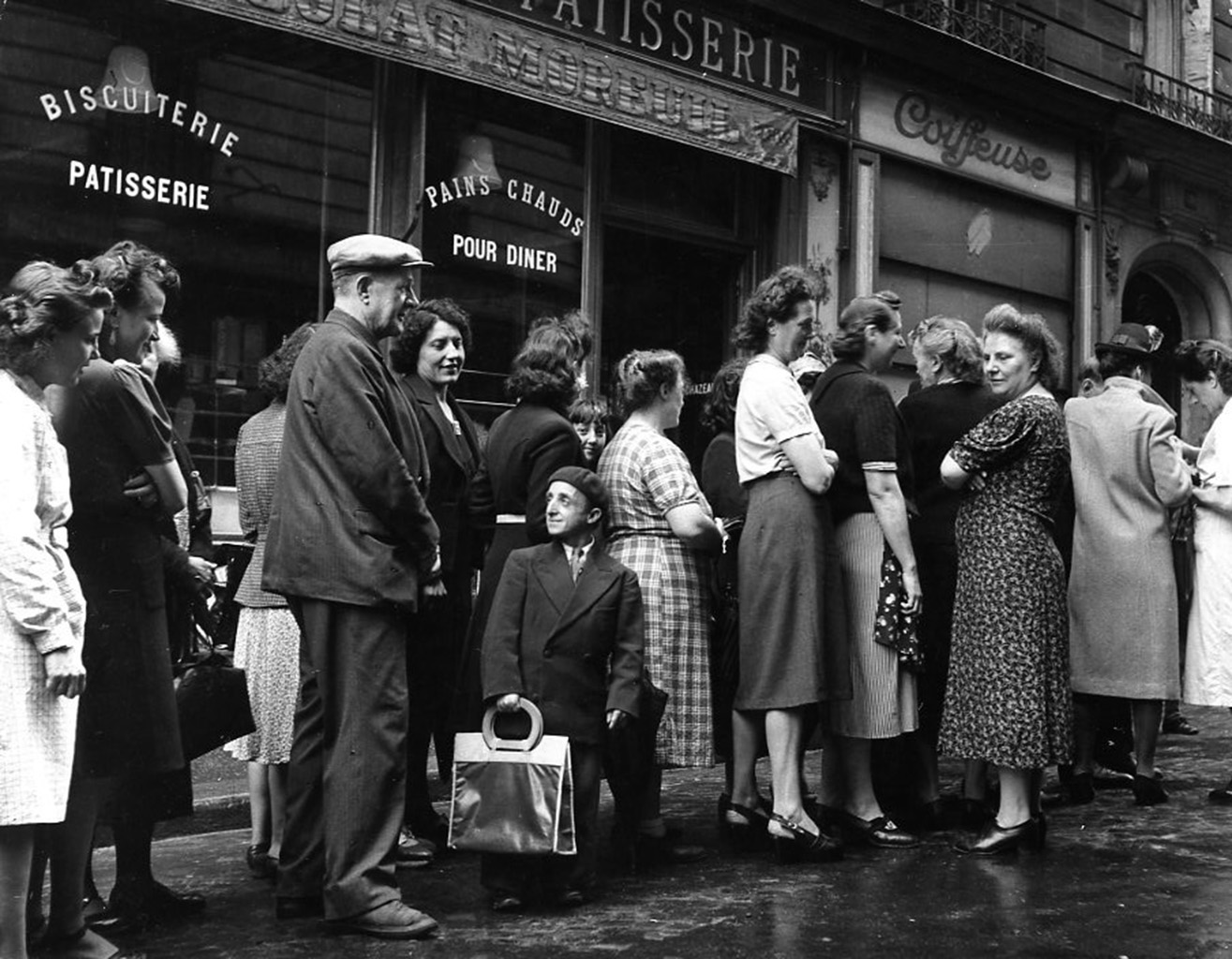 Alas military service nipped this promising debut in the bud. By the time it was over in 1934, Vigneau had succumbed to the economic crisis affiicting the entire nation and changed direction, taking up the moving image. It was again Lucien Chauffard, now head of photography at the Renault factories, who offered Doisneau a job. He accepted it on April 12, 1934, shortly before his marriage to Pierrette
Chaumaison, on November 28 that same year.

At Renault, Doisneau discovered a new world that he was never to forget, that of the workers’ solidarity and dignity. Discipline was harsh and the work was boring and repetitive. He recorded the life of the company using crude. heavy cameras, photographing the workshops and production lines while also working for the publicity department. “Renault marked the real beginning of my career as a photographer and the end of my youth.”

In this world of invariable monotony; he learned what working-class fraternity meant. And he also developed his own rebellious streak, so much so that, in June 1939, he was sacked or repeatedly arriving late. “I rediscovered the streets, where there was everything to see, with a sense of great joy and, naturally; a little frisson of anxiety.”

It was again thanks to Lucien Chauffard, who had recently opened a studio at the Porte d’Ivry; that Doisneau became acquainted with his co-worker Ergy Landau. Landau, in turn, recommended him to the director of a large Parisian agency; Charles Rado, who commissioned a first reportage on a canoe trip down the Dordogne. Doisneau’s enthusiasm soon gave way to anxiety when war was declared and his mobilization papers arrived. When he joined his regiment in Alsace, his haversack contained a pacifist tract by Jean Giono and the same author’s “Civil Disobedience”. Catching cold, Doisneau ended his active service in a military hospital. He returned to Paris only in April 1940, shortly before the armistice; the German army entered the capital on June 14.

In occupied Paris, Doisneau, like everyone else, put food on the table with a ragbag portfolio of occupations. He even wrote a life of Napoleon made up of engravings and paintings representing the Emperors’ deed and derring-do and sold it at Les lnvalides. In the 1940’s life was difficult and rations at a bare minimum. Aside from the few collaborationist papers. there was no press.  In 1942, his first daughter, Annette, was born. In an effort to meet the needs of his family; Doisneau made a few mediocre publicity photographs and undertook some reportages for the magazine Vrai there the cartoonist and illustrator Maximilien Vox was working. At Vox’s request in 1942, Doisneau made a series of portraits of scientists for a work edited by Laure Albin Guillot, Les nouveaux destins de l’intelligence française (The New Destinies of the French Intelligentsia), prefaced by Marshal Philippe Petain. This ran counter to his political views and, more importantly; his clandestine activities. Having been contacted by one “Monsieur Philippe” (the painter Enrico Pontremoli, as he later discovered), he fabricated all kinds of forged documents for the Resistance throughout these years. “During the occupation, I did clandestine photography and my diploma in lithographic engraving enabled me to make excellent forged papers.”

Despite the severe shortage of film and photographic paper, Doisneau nevertheless managed to make a few precious images of these dark years, illustrating the daily grind of the Parisian population under Nazi occupation: rationing, queuing in front of more or less empty shops, air-raid warnings, and people sheltering from bombs in the Metro. In 1942. he photographed The Fallen Horse as a metaphor of the French situation.

When the Parisian uprising broke out in August 1944, Doisneau began a frenzied campaign of photography. His images, though they show no corpses, constitute an authentic chronicle of the popular nature of this uprising and were widely published. Thanks to them, he was contacted by Adep, a cooperative photographic agency founded in the 1930s under the name of Alliance Photo: it now comprised photographers such as Henri Cartier-Bresson, the Seeberger brothers, and Jean Roubier. Adep took on the responsibility for distributing Doisneau’s photos of the uprising. But this proved a transitional arrangement. In 1946, Doisneau joined the Rapho agency; which was a revival of the agency founded originally by Charles Rado. For Doisneau, August 1946 was a whole new beginning “The liberation of Paris was a fine old chaos and, what’s more, distinctly photogenic. Certain places, always the same ones, seemed just right for barricades to appear in them.

Disobeying the order he had been given to cover Belleville-Ménilmontant, Doisneau criss-crossed Paris on his bicycle, taking photographs wherever anything was happening. From the Quartier Latin to Batignolles and from the Ile de la Cite to the Luxembourg Gardens, he made an impressive set of images of the liberation of Paris, which have since acquired the status of classics. The culminating point of this reportage was his historic photo, taken under the Arc de Triomphe, of General de Gaulle preparing to parade down the Champs-Elysees amid scenes of wild joy. These are portrait of men, women, and children in the euphoria of an excepcional moment in history: the restoration of liberty. There is very little violence but a great deal of tenderness in these iconic images. All Doisneau is there: his acute sense of observation and his empathy for his fellow humans. In addition to many publications in the French and foreign press, several little books were then hastily put together combining Doisneau’s photographs with those of Jean Roubier, Pierre Jahan, Pierre Roughol, Rene Zuber, and Suzanne Laroche.

“I set off from Montrouge by bike, a bag tied to the rack containing my Rolleiflex and two films – one for back-up. two twelve-shot films to cover the Liberation of Paris ! “

Shortly after these events, Doisneau made contact with an extraordinary man, Pierre Betz, editor of the magazine Le Point, where Doisneau became the resident photographer. The first issue of this magazine, published in March 1945, was about the clandestine press under the Nazi occupation, paying homage to the brave and anonymous individuals who, defying the gravest dangers, had undertaken the printing and distribution of tracts, posters, and newspapers. From September 1944 till early 1945, Doisneau made a series of remarkable  images whose backdrops were the most unlikely cellars. These might be described as expressionist images those of Claude Oudeville, printer of Vercors’s Le Silence de la mer, Comte in the cellar in which he hid his Phoenix printing machine, of Pontremoli (the notorious “Monsieur Philippe”) making tracts and other lithographic handbills to be posted on walls; of Harambat, printer for the Mouvement de Liberation Nationale; of Yvonne Desvignes hand-stitching copies of Le Silence de la mer; and, of course, of Jean Bruller, “Vercors” himself, the then-unknown author whose novel, written in 1942, became the symbol of taciturn patriotism.

A period thus came to an end in which Doisneau had become an actual participant in the profession closest to his heart. The years that followed were among his most prolific. They also witnessed major encounters that contributed to the blossoming of his talent.