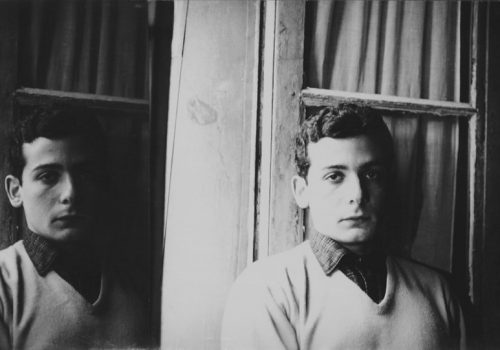 The Maison Rouge in Pars continues its cycle of exhibitions devoted to private collections. After Artur Walther in 2015 and Bruno Decharme in 2014, it is film distributor Marin Karmitz’s turn to reveal an important part of his collection, more than three hundred works which question our way of being in the world.

The collection of Marin Karmitz, French, born in Romania, patiently made over thirty years, is the latest achievement by this man better known for the films he has helped bring into the world and for the MK2 movie theatres that have transformed the Parisian neighbourhoods where they have been introduced.

Having begun his career as a film director, it is as a film director that he devised the display of hundreds of photographs, paintings, sculptures drawings, videos being shown at the Maison Rouge in Paris. The exhibition is a screenplay that intermixes many stories. Like the whole collection, it forms a self-portrait that alludes to the collector’s personality, each work tells us a little more about his interests, convergent and divergent though they may seem.

The collector’s practice is progressively revealed, the choice of artists who have moved him, the patient assembly of coherent groups by the same artist, be it a photographer or a multidisciplinary artist, the continuing dialogue with some of them. The photographs also evoke an era (the twentieth century and its tragedies) places (Europe and the United States) through different media: video, photography, painting, drawing, sculpture and several large-scale installations (Annette Messager, Christian Boltanski, Abbas Kiarostami, Chris Marker) where black and white dominates without being exclusive. Intensely personal, committed, exacting and not always amiable, this collection shown for the first time, almost in full, is exceptional for the quality of the works and ensembles that comprise it.

Many of the artists have things in common in having been chosen and put on display by Marin Karmitz. By him alone? During the closing credits, the spectator has plenty of time to ponder this question and devise their own story. A catalogue, co-published by Maison Rouge and Fage Éditions accompanies the exhibition, with, notably, texts by Julie Jones and a superb interview between the journalist and curator Christian Caujolle and Marin Karmitz. It also includes the writer Erri de Lucca also who writes, “Marin Karmitz identifies with the condition of being a foreigner and a resident. He was born during a century of  great human beings haemorrhages  from one country to another. Having landed in Marseilles, the Karmitz family became citizens of France. Today, Marin Karmitz can put the Medal of the French Legion of Honour into his desk drawer, a solemn accolade from his second country, yet he remains a resident alien.

Trees have their roots, but people don’t. They replace them with what they sow and what they reap. His home is his harvest. Marin Karmitz is not a collector; he doesn’t have any ravenous obsession for completing the set, the distress of accumulation. He collects together his encounters with the work of artists. It is the museum of a man, of someone who walks along the beach and finds what the sea has washed up.

This exhibition is a self-portrait made of fragments, but they are not the tiles of a mosaic, where the whole creates an image. Instead they are masks on the face of a man. Here there are his many features, overlapping each other, a set of encounters with himself. In ancient Hebrew there is no singular form for the word ‘face’, for everyone has many. Displayed here are many of the faces of Marin Karmitz, but not all of them.”