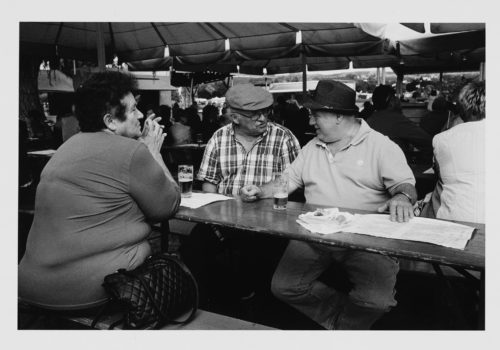 It is because his country and its people are terribly unknown, suffering from widely conveyed prejudices, reducing Luxembourg to a sort of opaque City and its fellow citizens to a shady group of profiteers of tax evasion, that he chose to ‘offer to discover a much more complex reality. He therefore decided to devote three years of his life to photographing everyday life, the often endearing daily life, the surprising diversity of a population whose wealth is not measured in euros but in lived experience.

With uncompromising acuity, a look that is sometimes clinical and not devoid of humor but also a deep tenderness, Reuter captured the image of his fellow men, whose first characteristic is not being, similar. The ethnic, social, generational, national and linguistic diversity of the Luxembourg population had rarely been documented in such depth. As much as a book of photographs “Gens de Luxembourg” is a sociological work on a changing society, shaken up in its provincial torpor by extremely rapid industrial, economic, demographic and societal changes.

Thus, years after having published an album devoted to the reigning Grand Duke, under the title “Jean de Luxembourg”, Raymond Reuter chose to publish a book on the sans ranks, the unknowns, the actors of the daily newspaper, under the homophonic title “Gens de Luxembourg”, entrusting the writing of the texts to the Frenchman Claude Frisoni.

These “Gens De Luxembourg”, their nobility is not in the particle, it is particular. Because if there are “people from above”, people from below are the multitude that lives and vibrates, they are energy and authenticity, the mosaic of those who make a village, a park, city, theater, store, neighborhood, performance hall, market, pedestrian street, train or public garden actually exist. Empty, all these spaces have no more essence, so people no longer exist; people are legend.