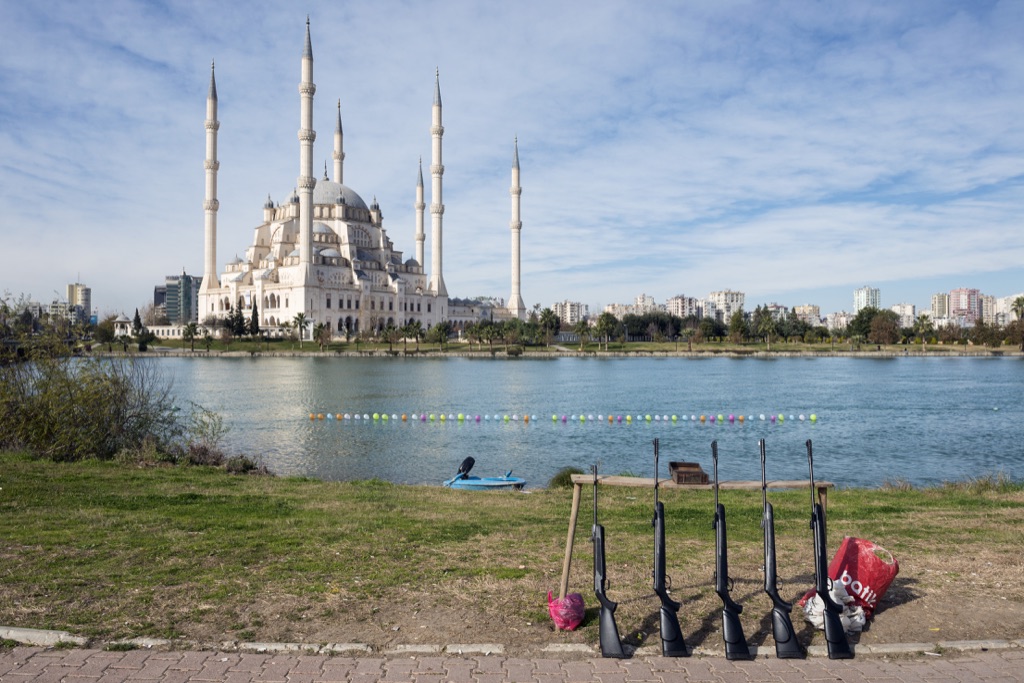 Ulysses once took a long trip through the Mediterranean. From 2010 to 2014, Nick Hannes followed in his wake. Instead of sirens, he only met silicone-stuffed bimbos with fake eyelashes and heartshaped red plastic pasties. The age of heroic navigation is long gone. Voyagers have given way to tourists, and a delightful world has flipped round to reveal an insipid underside.

The sky here is too blue; the grass too green. That’s normal—it’s fake. Nick Hannes’s Mediterranean coastlines belong to a staggeringly artificial realm. Not even  humans look real. When they strip on a beach, their bodies seem absorbed in fat; when they don their bathing suits to meet the sea, we keenly feel they are putting on a show and that this is all some comedy staged around the ice-cream stand: a comedy of compulsory pleasure. Multicolored parasols bristle everywhere, flags of an inglorious expedition.

To avoid distractions from his forced leisure, homo festivus has built enclaves, always green and blue. Walls separate him from the drab world beyond, home to all those who aren’t here to enjoy themselves. If only these were the only walls! Nick Hannes’s southern views are painfully riven by other divisions, wrapped in other razor wire: of war, of occupations, of every kind of exploitation.

Crowded onto skiffs that rock in the wake of cruise ships, innumerable immigrants lift the sorrowful countermelody of a cruel sea, destination Lampedusa. Violent colors hint at the violence of men and nations. Nick Hannes bears witness to all of this without sentimentality, without disdain, eye to eye with humanity, caught between empathy, amusement and consternation. In his modesty, he never emphasizes the composition of his images, no matter how elaborate. These images do not just seduce the eye — they make one reflect at length on the harshly contrasting destinies of the Mediterranean world.