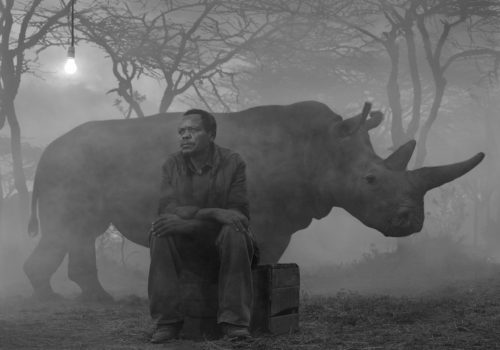 Nick Brandt’s new body of work, The Day May Break, is launched in the UK with Atlas Gallery at Photo London (9–12 Sept) and at the gallery itself in London W1 (16 Sept–29 Oct), and in Los Angeles at the Fahey Klein Gallery (9 Sept–31 Oct).

A powerful visual polemic by a committed environmentalist and artist, The Day May Break is the first part of Brandt’s global series portraying people and animals that have been impacted by environmental degradation and destruction. Largely shot in black and white, they wait together with stoic grace for their joint fate to unfold, as if suspended in time and space.

Brandt made the work during the pandemic in late 2020, at five sanctuaries/conservancies in Zimbabwe and Kenya. The people in the photographs had all been badly affected by climate change themselves – some displaced by cyclones that destroyed their homes, others displaced and impoverished by years-long severe droughts. The animals – rhinos, cheetahs, elephants, giraffes, antelopes, zebras, owls, eagles, flamingos – are almost all long-term rescues, victims of everything from the poaching of their parents, to habitat destruction and poisoning. Unable to be released back into the wild, including the last two northern white rhinos in the world, they are habituated. And so it was safe for human strangers to be close to them, to be photographed in the same frame at the same time.

The people and animals make no physical or eye contact, and yet they are unified within the space by the limbo-like fog that evokes a once-recognisable world now fading from view. The fog is also an echo of the wildfires, driven by climate change, devastating so much of the planet. The props – a chair, a table, a bed – represent the bare bones of existence, all that remains for basic survival: somewhere to sit, to lie down, a bare lightbulb to see by as night falls.

“Twenty years ago, I started photographing the vanishing natural world of Africa,” says Brandt. “This led to a series of works about habitat loss and biodiversity loss,” In The Day May Break, everyone has a story to tell. “However, despite their loss, these people and animals are the survivors. And there – in this survival through such extreme hardships – lies possibility and hope,” says Brandt.