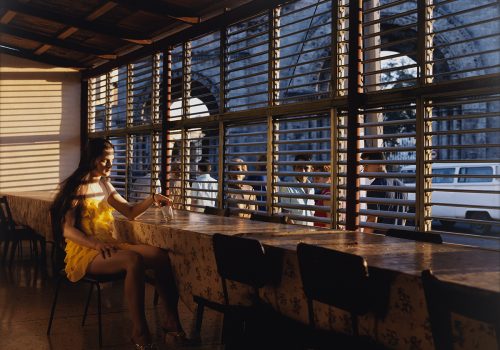 David Zwirner presents an exhibition of photographs by Philip-Lorca diCorcia. The exhibition will feature images from a series of eleven editorial projects that the artist created for W magazine between 1997 and 2008, including several photographs that have never been exhibited before.

DiCorcia emerged in the 1980s as part of a generation of photographers who sought to explore and challenge the boundaries of the medium. Over the past three decades, he has become known for his meticulously planned and executed photographs involving a variety of individuals, including friends, relatives, anonymous strangers, pole dancers, and street hustlers, among others. Arranging his subjects in preconceived yet seemingly random positions and contexts, diCorcia produces images that are far from candid snapshots but rather explore the tension between the casual and the posed, the accidental and the fated. At once documentary and theatrical, his work operates in the interstices of fact and fiction.

In 1997, diCorcia began travelling around the world to produce the photographic essays for W magazine. Depicting his own models as well as people cast on the spot, these images weave together richly loaded narratives and sometimes appear far removed from the fashion industry’s traditional emphasis on formulaic beauty and harmony. Instead, they involve a delicate balance between glamour and grit, imagination and irony. Photographing in Bangkok, Cairo, Havana, Los Angeles, New York, São Paulo, and St. Petersburg, diCorcia created distinctive series that are rife with ambiguous meanings and loaded connotations as characters appear and reappear in myriad settings.

Although the images take everyday life as their point of departure, there seems to be a symbolic dimension to the works, whereby they transcend their sharply lit, matter-of-fact presentation. As the writer Mary Gaitskill notes of the series, “These pictures are very different in location and in their most visible ‘story.’ What they share is their field of depth, the sense that there is some much bigger, stranger story present in them which diCorcia has allowed us to apprehend much as we briefly apprehend, often without knowing or caring about it, the inner life of a stranger or the humming inhuman life of nature. Most obviously his focus is on the cool social structures, the hot individuality of human life—but the elemental, as it is physically expressed, visually glimpsed but finally unknowable, is quietly, magnificently present in his work.”1

This selection includes one of the most iconic images from the series, a photograph featuring French actress Isabelle Huppert, whose face stands out among passersby on a crowded and obscured Parisian street. Another quintessential image from the series was taken in New York in 2000 and appears to depict a well-to-do family lunching at the top of the World Trade Center, with the second tower visible through the window. Among the

never-before-exhibited images is a 1998 photograph taken in Los Angeles of the darkened interior of an airplane with a single female figure standing with a worried expression on her face. An image from 2008 taken in Cairo, also being presented for the first time, depicts two figures sitting on an unfinished or partially demolished building with the pyramids of Giza in the background.

The works on view together embody diCorcia’s critical engagement with and detachment from traditional genre expectations. Highly stylized and meticulously crafted, they are at once visually sumptuous displays of diCorcia’s mastery of his technical craft and evocative reflections on class, society, and the status of the photographic image in contemporary life.

Born in 1951 in Hartford, Connecticut, Philip-Lorca diCorcia attended the School of the Museum of Fine Arts, Boston, and received his MFA from Yale University, New Haven, Connecticut, in 1979. The artist’s first museum solo exhibition was organized by The Museum of Modern Art, New York, in 1993. His work has been represented by David Zwirner since 2007. This will be his seventh solo presentation with the gallery. In 2011, ELEVEN, a comprehensive publication featuring the entirety of diCorcia’s eleven W magazine photographic narratives, was published by Freedman Damiani. The publication coincided with an eponymous exhibition of select images from the series at David Zwirner New York.

In 2013, a major career-spanning survey of diCorcia’s work, consisting of more than one hundred photographs from six series, was organized by the Schirn Kunsthalle Frankfurt. The exhibition travelled later that year to the De Pont Museum, Tilburg, The Netherlands, followed by The Hepworth Wakefield, England, in 2014, and marked the most comprehensive presentation of his work in Europe to date. In 2012, work by diCorcia was included in a major retrospective on the American artist Edward Hopper at the Grand Palais, Paris.