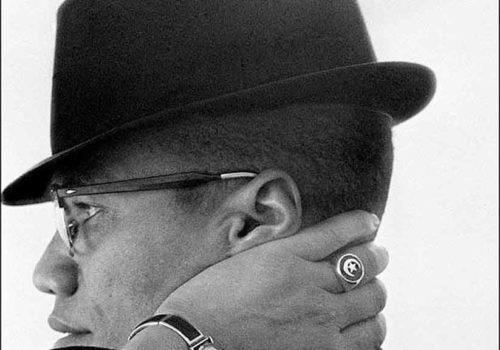 This is the 24th installment of the online series by Peter Fetterman Gallery called the Power of Photography highlighting hope, peace and love in the world. We invite you to enjoy and reflect on these works during this time.

Eve was a fireball. She was the first woman photographer to join the prestigious Magnum photo agency, very much a “boys” club at the time but her drive and determination, not to mention her prodigious talent, allowed her to hold her own and excel at every story she covered. Her reportage on Malcolm X, the controversial and charismatic leader of the Nation of Islam, was one of her best. After much hard work and persistence she was given unparalleled access to him and followed him for a year from Washington to New York to Chicago where this image was taken. Like many skilled politicians he was aware how important image was to serve his goals as the public face of his organization.

As Eve articulated,
“I am always delighted by the manipulation that goes on between subject and photographer when the subject knows about the camera and how it can best be used to his or her advantage. Malcolm was brilliant at this silent collaboration. He knew his needs, his wants, his best points and how to get me to give him what he required.”

He was assassinated on Feb 21st, 1965 at the Audubon Ballroom in New York City at the age of 40 years old and this is the image that has defined his legacy.

Sebastião and his wife Lélia were forced to leave their homeland of Brazil because of the clamp down by the political dictatorship at the time and the subsequent intense repression of individuals who did not toe the line.

They left for France to start a new life. It was there almost by accident Sebastião discovered the power of photography and changed his profession from being a highly respected economist to a fledgling photographer.

As anyone who has experienced exile and the loss of one’s roots there is always some kind of pull to return to them. He and Lélia carefully planned his first major project traveling to Brazil, Ecuador, Bolivia, Peru, Mexico and Guatemala which resulted in his first powerful book “Other Americas”.

The power of these images is succinctly summed up by his friend Alan Ridding,
“Salgado has sought out a lost corner of the Americas and he has made it a prism through which the entire continent can be viewed. A philosophy of life is caught in a look, an entire way of life frozen in a moment.”

Nudes have always fascinated photographers since the birth of photography. But like any subject matter that is often visited and revisited ad infinitum it is extremely difficult to create something truly special.

But here is one of those images. Sarah rarely shows the entire figure in her work. The face is often hidden or the head cropped out which adds to the image’s mystery and otherworldliness. This is one of the most moving and sensuous images I have ever seen. Did Marthe really exist or is she just a dream?

Steve McCurry was wandering around Jodhpur shortly after the celebrated annual Holi Festival of Colors had taken place. That is the reason the red handprints were still on the wall on the left side of the image. There was lots of activity going on in that alleyway – vendors, animals, human flow back and forth. Steve spent a few hours there got some shots then went back to his hotel to rest. Something told him he should go back again the next day to see what else he could find. His instinct was right. After a couple more hours out of the blue comes this little boy running with such joy in his heart and voila Steve got it and created one of his most special images. Always trust your instincts that’s what I say.

I love Marty’s line here “I see the child as a chrysalis of a future adult”. He certainly nailed it here. The body language of the two children tells it all. The girl a little nervous and the boy nervous too as can be seen in the way his legs are somewhat twisted like a pretzel despite his apparent confidence and coolness. Coney Island was such a refuge and still is for so many New Yorkers trying to escape the pressures of the city and in the Summer the unbearable heat.

Like the other areas of the city a sense of genuine community prevailed in the 1950’s when this image was taken.

This has always been one of my favorite music images. The Rolling Stones are of course part of my youth and Mick’s sage credo has always resonated with me. But this image was shot in one of my favorite spots in the world, Primrose Hill, on the edge of Regent’s Park in London. I always go back there to spend some quiet reflective time each time I am back in the United Kingdom. I discovered it when I was very young before it became hip and trendy. You stand on the top of the hill and it has such a grand, enveloping vista of this special city with all its hopes and dreams and challenges all in front of you. I always wanted to live there but so far that has eluded me.

I’m sure it has a special meaning for Gered too. He had connected with the Stones’ seminal manger Andrew Loog Oldham and after an all night recording session he suggested that location to the guys to shot a cover for their upcoming album.

Bleary-eyed they pile into their cars and go there. Gered’s genius that early morning was to construct a filter of black card, glass and Vaseline and attach it to the 50mm lens on his Hasselblad 500c camera giving the image its somewhat otherworldly out of body experience and sense of abstraction. The fact that it was bitterly cold that morning added another element.

It certainly advanced Gered’s career as he was asked to go on tour with the Stones that year to the States. He is the most normal, intelligent, easy to work with music photographer I have ever met.

Eve Arnold (1912-2012)
Marilyn Monroe, on the Nevada desert going over her lines for a difficult scene she is about to play with Clark Gable in the film, “The Misfits” by John Huston, 1960
© Estate of Eve Arnold /Courtesy Peter Fetterman Gallery

Eve Arnold, a pioneering woman in her own right, enjoyed a long professional relationship with Marilyn Monroe, a much photographed icon. But she captured the most “human” and “intimate” photographs of this most elusive of stars. Gone are the traditional “glamour” shots one comes to accept of Hollywood portraiture. Because she had her confidence, Eve allowed her to reveal more of her essence and vulnerability than her male photographers.

It is well known that the set of “The Misfits” was a much troubled production. It turned out to be the last film for both Monroe and Clark Gable. The Magnum Agency was given the exclusive right to photograph the film and be on set.

What makes this image one of the most haunting for me to come from this time is that one never quite knows whether Marilyn is lost in thought as the character she is portraying or whether she was truly lost as herself in her own life. Such is its power, whether it is the truth or the artifice of cinema.

What distinguishes Lillian from so many of her contemporaries in the fashion world during her key 1950’s creative period was her interest in creating a new kind of vision aside from what the camera saw. She developed a bold graphic style often floating images in space, dodging and burning, playing with selective focus and bleaching her prints. In this sense she was completely self taught and experimental right from the beginning of her career. She never apprenticed herself to any studio photographer but was an autodidact in the darkroom. She never constrained herself by what was “normal” and “traditional” and almost expected by the magazine or commercial clients she ended up working for. She certainly marched to the beat of her own drum and was steadfast in her vision. The effects she sought were pretty unorthodox for the time and not really being used by anyone else. That’s what makes her work so special.

I have always been in awe of this image of Willy’s. It certainly contains the most number of uncontrollable variables of all his images and for that matter anyone else’s. He told me once that he nearly pressed the shutter so many times that winter afternoon in 1950.

First he noticed the dray being pulled by the horse. Then the worker repairing the traffic light. Then the cobbler chatting to the pharmacist in the white coat. He was about to shoot when out of the blue he told me the mother and child came from behind where he was standing unexpectedly. Then he knew instinctively he might have something special that captured daily life in Paris, his favorite subject matter. They certainly center the image. The skipping light patterns and shadows are beautiful and lyrical, like an urban ballet.

Sid had a unique personality. You couldn’t help but warm towards him. Friendly and unpretentious. It is easy to understand that sometimes, often “difficult” personalties within the film industry became someone else in his presence. This was how he managed to create such an extraordinary body of work in the “golden age” of Hollywood before television altered the entertainment landscape for ever.
Here is a typical example of his talent to eliminate the artifice of “stardom” and bring it into the “natural”. It’s one of my favorites. We see the great Paul Newman cracking eggs and making breakfast for his wife Joanne Woodward whilst she is standing there with her favorite dog. It could be us right?