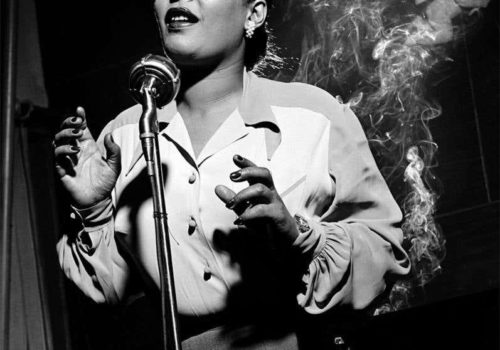 This is the 21st installment of the online series by Peter Fetterman Gallery called the Power of Photography highlighting hope, peace and love in the world. We invite you to enjoy and reflect on these works during this time.

I’m sure all of us are listening to a lot of music during these times. I have been finding great solace in listening to a lot of Billie Holiday, who had one of the greatest voices of all time. There is such honesty and beauty and sometimes pain in her voice but she only sang about the truth. She knew nothing else but to just be herself.

Both Herman Leonard, one of the greatest Jazz photographers ever, and Don Hunstein, the lesser known inhouse photographer for Columbia Records for 30 years, were masters of their craft and both had such an easy going manner and empathy for the great artists they worked with and their images show this and how comfortable their subjects felt being with them.

Gianni is 90 years old now but like many photographers I have met who live into a ripe old age they are still full of life and positive energy. This image has always put a smile on my face. I guess I am old enough to remember 78 gramophone records and record players like this. There must have been a whole era before streaming services!

No social distancing here. A moment of spontaneous joy and happiness to revel in.

This is one of the most beautiful, rare Brett Weston prints I have ever seen. It was secluded away in the private collection of his only child Erica given as a special gift to her by her father. It is large, impactful and as powerful as any great abstract painting by Franz Kline, Jackson Pollock, Robert Motherwell, Mark Rothko, Willem de Kooning et al that you will ever see at the Museum of Modern Art in New York.

Unlike his West Coast colleagues Ansel Adams, Wynn Bullock, Imogen Cunningham and even his esteemed father Edward Weston, Brett traveled extensively outside of California mainly in Europe but also in Japan and created equally important work inspired by what he saw there. What this work has in common with his classic American imagery is the supreme craft and beauty of the physical print which is unrivaled.

This to me has always been the best example of that special “Paris Light” I always enjoyed experiencing.

It was taken in the afternoon in 1948 near the intersection at Sevres-Babylone, Willy had done his homework. He was acquainted with his beloved city like the back of his hand. He knew what time of the day he had the best opportunity for great light and one of his favorite sources, back light. The composition is perfect with the awning on the left hand side of the frame and the veiled sun in front.
As Willy recounted in his notes,
“I had taken taken two shots with little enthusiasm and then suddenly this woman appeared out in the open. Jubilation was immediately followed by a twinge of unease, as is always the case in these delicate situations. Had I pressed the shutter at the crucial moment?”

Well he certainly did as you can see. Pure magic!

I wanted to start this new series with an image that I hope will help us to achieve this. It has always helped me whenever I look at it.

It is what I call a “Top of the Mountain” image. Why that description? Well for me it was taken by someone I have always held with the highest esteem, Henri Cartier-Bresson, to whom I owe so much to, both professionally and personally.

And it is also really about the essence of photography…Light.

As this little girl in Rome enters a symbolic new moment in her life to hopefully a bright future my hope for all of us this year is that we can join her on her journey.

I think this is one of the greatest group of social documentary photographs ever taken. When they were first published in the New York Times in the 1980’s no one could believe that these images were taken in the times in which we were living.

What were these ant like figures doing? Building the pyramids? Living in Dante’s Inferno?

It was just so shocking and defied belief. These images made Sebastiao’s career and set him up so he could continue his predestined path into the history books as one of the greatest photographers who has ever lived. It has been a great honor to have worked with him since the beginning, over 30 years now. I have never come across any other photographer with such passion and determination aided by his equally talented and focused creative partner and wife, Lélia Wanick Salgado.

We are all looking forward to his next great 8 year epic project “Amazonia” which will be launched globally in April of this year. Please stay tuned.

Jodhpur is one of those places I have always been intrigued by. The blue buildings have often been associated with Lord Shiva and his Brahmin followers in this city who throughout history have believed this color to be sacred.

What makes this image so special for me is the man and woman who observe the city from a roof in the foreground of the image giving it its human dimension and its mystical narrative quality.

This is one of Louis’s most profound images. As I have often said all collecting is autobiographical and of course I relate to it because I too came to America over 40 years ago and understand only too well the nuances of starting over in a new land.

In a way it is an unconscious homage or sequel to one of the most iconic images in the history of photography, Alfred Stieglitz’s “The Steerage.” There the boat was leaving America, here it is returning. The writer Pierre Brochet perhaps has expressed most eloquently the power of this image in these words which echoes my own thoughts.

“Coming to America has overwhelmed me. I feel such a fraternity for the portrayal of this man stripped of his birthplace, a man who must be deep inside all of us.”

In this new year as we all hope for more tolerance and empathy it will have even more relevance than when it was first shot 70 years ago.