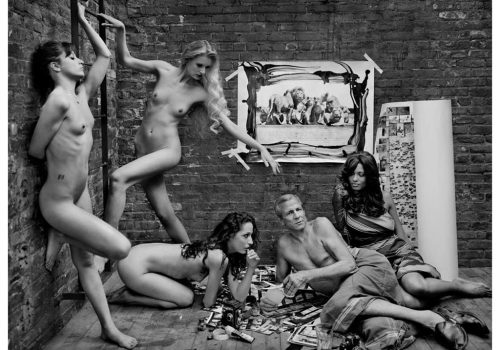 Peter Beard passed away. After he disappeared almost 3 weeks ago , his body was found. The end of a long descent into hell from one of the most flamboyant contemporary photographers.

With an uncommon character, he was an hallucinating seducer, prophet before the age of an ignored African ecology, he represents an era now gone of excess and passion.

Three people who were once very close to him tell us about Peter: Peter Riva, his agent and accomplice for 20 years, the grandson of Marlene Dietrich; Anne Clergue, a teenager, saw Peter in the entourage of her father Lucien and Anna Winand, the double of Cornell Capa, who lived the most beautiful retrospective of Peter in 1977 at the I .C .P.

Tomorrow I will share with you some memories of Peter that I have known quite well!

The passing of a friend at a good age always leaves one with mixed emotions. Peter Beard, in his prime, was active, engaged, always slightly out of control, and resolutely determined—whatever the cause or desire. His passing leaves behind a legacy—a legacy reflected in the work, appreciation for living, all the while understanding the wild world he always loved and lamented was disappearing. When I was advancing real awareness at the UN Environment Programme in the ‘80s and early ‘90s there was an appreciation there of his proclamation of public myopia re the degradation of the environment that was similar to Ted Turner’s relentless banging on a drum about the looming global catastrophe—a catastrophe that the public is now only realizing.

As his agent for almost twenty years, I travelled extensively in Africa with Peter and a bevy of talented people, created and produced a prime-time special for ABC in 1988, and produced his major retrospective in Paris in 1996 with Peter Tunney. We saved his archive from dumpsters, rescued negatives from disparate photolabs across the world, republished his three classic works at Chronicle, created—hours every night editing and re-writing for weeks—his ode to his daughter at Knopf with Vicky Wilson, published the definitive biography of his life in Africa with Jon Bowermaster, produced Gillies Turle’s photo memoire of Maasai lost cultural art with Mark Greenberg, and worked with every magazine imaginable with models like Iman, Janice Dickinson, Maureen Gallagher, not to mention scores of fashion designers, actors, and actresses. In between all these adventures, Peter often used my kids’ beds for daytime sleep while they were at school while my wife, Sandy, re-sewed his one blue blazer only to watch People magazine rate him as one of the best-dressed men. After the wonderful Cheryl Tiegs and he parted, in the late ‘80s we helped his wife Najma escape to be with him and, later, was there at the birth of his daughter Zara at Mt. Sinai while Peter slept on our couch on 95th St.

Legacy is all about what you leave behind, what differences you made while alive. There can be little doubt that, on balance, the planet was better off for Peter’s presence. As his mother often told my wife and I, “Peter is lucky to have friends like you who overlook his habits and help promote his genius.” In the end, that is what helping legacy is all about.