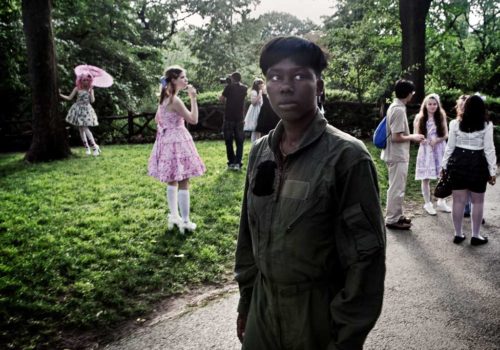 François Pesant has chosen to address an invisible phenomenon, a scourge that has left deep psychological scars on an entire system: rape in the United States Army. Shame, anger, betrayal and courage are all on display in the legal and emotional chaos. By making photographs the instrument of this fraught narrative, Pesant visually communicates the conflicted feelings of the rare victims who dare to speak out.

We see a portrait of Ruth, collapsing under the weight of medals, wearing the navy blue and gold tie of disabled veterans, smothered by the stars and red and white stripes of the flag that represents the system she dared to challenge in an effort to restore meaning to what the flag symbolizes. She stands straight, steadfast and proud at having confronted the paralyzing and omnipresent authority. Then there’s Shatiima, “lost in Central Park,” betrayed by those who were sworn to protect her, vibrant and fragile in her slightly blurred portrait. Behind her, the sun illuminates a patch of grass where a group of girls pose like dolls in ruffled, flowery dresses, their little shadows decorative as they suck on lollipops and laugh mischievously. There’s no hostility, only a trace of the absurd, but the sidelong glance of the anti-heroine, in the center of the image, somber in her khaki outfit, reflects her continued distrust of the world, however harmless it may appear.

The book is divided into portraits of victims, women and, unexpectedly, men, who appear alongside their families. The photographs are accompanied by long interviews conducted by Alexandra Geneste, who surveys the full spectrum of their experience, revealing their shared experiences and emotions. These are supplemented with statistics, studies, medical records,  conversations with family members and excerpts from diaries, producing a moving portrait of this  overlooked crime.

The attack has turned some victims into shadows of their former selves, doomed to wander a cold and threatening world. It invades their personal lives, filling their medicine cabinets with countless drugs. Cigarettes are dragged nervously down to the filter. A simple trip outside the home becomes a harrowing journey. François Pesant’s aesthetic is defined by its patient and respectful rhythm, attentive to the subtleties of a trauma that refuses to remain silent.