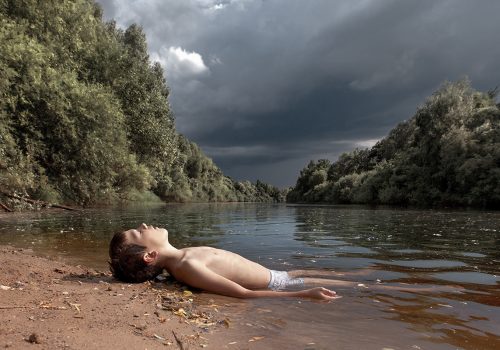 “They are not just ‘social photographs,’ as many people see them, they are my personal encounters and scenes. Every added picture is another chapter in my own history. And when I get asked why I go after ‘life’s unpleasant side,’  I reply, ‘because I am a part of it.’” – Dmitry Markov, 2017

galerie du jour agnès b. presents the works of Russian photographer Dmitry Markov at Paris Photo 2019. His unflinching documentation of daily life in the Russian province of Pskov on the outskirts of urbanity weaves a narrative of human vulnerability, addiction, candor, and pathos.

Photography came late in Dmitry Markov’s life, but since then, he has become a photographer, a daily photographer, a landmark of all his life’s “ups and downs.” He is honest enough to share with us his contradictions and weaknesses. He stares at the world, trying to find his own place and by the strength of his images he succeeds to takes us on board with his story.

The people he takes pictures of instantly become part of his own story. He looks at them as he looks at himself, with no condescension and no moral judgement. He is documenting his life and sharing on Instagram as if it were some kind of visual chronicle. Only a lonely man can, with his fascinating day-by-day, create such a long-term self-portrait, searching for himself through the presence of the others.

Dmitry Markov (b. 1982 in Pushkin, Russia) is a photographer, social worker, volunteer and journalist. He worked for more than 8 years in a boarding school for mentally disabled kids in the region of Pskov. Dmitry Markov takes photos using only an iPhone and shares them on his Instagram page to his more than 426,000 followers. Markov studied at the Faculty of Philology in Moscow and actively wrote for youth magazines and newspapers on a voluntary and part-time basis.

He left university after three years to be a full-time reporter and later worked for the Russian weekly newspaper Argumenty i Facty where most of his articles were devoted to social issues and youth problems. His first book, #DRAFT #RUSSIA, published in 2018 by Treemedia, is a real logbook documenting the true lives of ordinary people from the Russian province.

In 2015, Dmitry Markov was awarded the Getty Images Instagram Grant and his photographs were exhibited in the Photoville Festival in New York. In 2018, his photographs were exhibited at the Manuel Rivera Ortiz Foundation during the Arles International Photography Festival and at Paris Photo with galerie du jour agnès b. In 2019, Dmitry Markov was the first Russian national to be chosen by Apple for its advertising campaign “Shot on iPhone”. That same year, his work was also presented at agnès b. galerie boutique on Howard Street in New York and at VisionQuesT 4rosso in Genova, Italy.