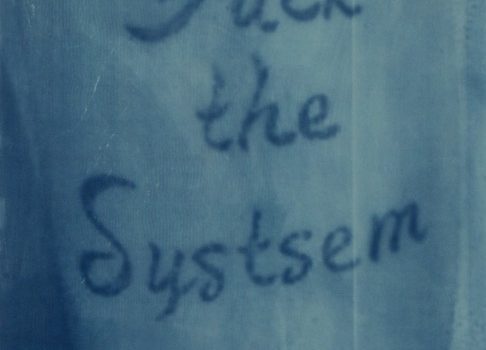 Presented together in a vibrant display, Roman Road’s stand at Paris Photo 2016 features Thomas Mailaender’s Cyanotypes and Illustrated People. Working with alternative processes, these two bodies of work explore Mailaender’s innovative approaches to photography and the possibilities of printing with ultraviolet light.

Thomas Mailaender has dedicated much of his contemporary practice to elevating vernacular archived and online images into the line of art. The first project featured at Paris Photo is a selection of photographs from his series Illustrated People. The project was developed in collaboration with The Archive of Modern Conflict, London, a collection comprising over 4 million amateur and professional photographic documents from the 19th and 20th centuries. Mailaender was given carte blanche to mine the archives in order to realise a project for a book. Focusing on photographs from WWII, he positioned his selected images upon the bodies of models. He then sat them under a powerful UV lamp until a temporary positive image was revealed, and photographed the results. The archived images appear on different parts of his volunteers’ bodies, printed on the burnt skin that became bright red.

The stand also features a varied selection of works from his project Cyanotypes. These blue-hued photographs, also made through exposure to ultraviolet light, show images taken from the artist’s ‘strange Archive’: a personal collection of bizarre and anonymous pictures gleaned from the Internet. His largest works, mounted upon plasterboards measuring 250 x 120 cm, feature arresting images that draw attention to the often-absurd nature of human behaviour today. Interweaving among these large-scale works, the stand also includes a number of the artist’s smaller paper prints through which he has mixed cyanotypes with rayograms. These works accentuate the artist’s hand, adding to the artistic sensibility and the uniqueness of his Cyanotypes.