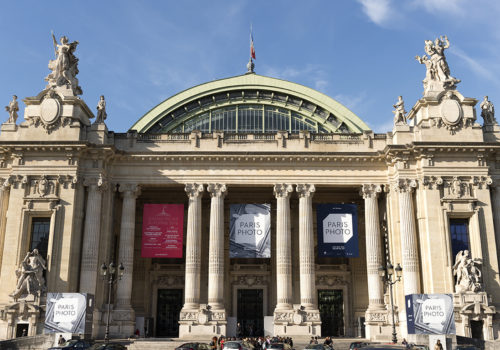 Held from November 10 th  to 13th in the Grand Palais in Paris, Paris Photo is celebrating its 20th anniversary.In this gigantic fair for  still images, 153 galleries and 30 publishing houses from around the world set up booths under the glass vault. The Eye of Photography will be your guide to dozens of stands.

Two Mexican galleries have set up shop at Paris Photo: Patricia Condé (A26) and Emma Molina (A29). Latin-American photography, in all its forms,  in the spotlight: from the realism of Hector Garcia to the surrealism of Manuel Álvarez Bravo at Vintage Works (D38). Álvarez Bravo’s disciple, Flor Gaduño (the Patricia Condé, Tasveer, and Sophie Scheidecker Galleries) is on view with her work on indigenous cultures and poetical feminine nudes… Lastly, the work of Armando Salas Portugal is showcased by Taka Ishii (A20) alongside images of urban violence in Mexico City by Enrique Metinides featured at the Emma Molina Gallery.

The Prism Sector is dedicated to exhibiting rare works, large formats, series, and installations which explore the photographic medium. This year it has expanded into the Salon d’Honneur on the upper level of the Grand Palais, in order to allow numerous galleries to exhibit original works and projects. Those include street photography by Anthony Hernandez, still little known in Europe, currently  at SFMOMA (the Thomas Zander Gallery); the work of the Brazilian environmentalist Caio Reisewitz (at the Bendana Pinel Gallery); Issei Suda’s masterpiece Fushikaden, whose title roughly translates as “the transmission of the flower acting style” and which refers to early Japanese Noh theatre established in the 14th century (at the Jean Kenta Gauthier and Akio Nagasawa Galleries); as well as a glimpse of the digital era by Penelope Umbrico (at the Bruce Silverstein Gallery).

The 16 solo shows include the work of the American photographer David Lachapelle who dissects fashion, pop culture, and gender, at the Staley-Wise Gallery (D40). There is also Argentinian Alberto Greco, whose series Alberto Greco in Piedralaves marks a break in the conceptual art movement of the 1960s; master performer, he transforms his everyday life into a work of art (on display at the Del Infinito Gallery, D11). Caroline Smulders (A31) turns her attention to the American avant-garde, with Gérard Malanga, Andy Warhol’s principal collaborator from 1963 to 1970, showing for the first time a series of nudes began in 1975. Lastly, not to be missed is the series Mectoub—portraits challenging male identity in the Middle East and North Africa—made by Scarlett Coten, winner of the 2016 Leica Oskar Barnack Award.

Featured by four galleries, with her erotic nudes, working-class Paris, and ordinary people, Germaine Krull was an outsider to the photographic and avant-garde milieus of the 1920s–1940s. The subtle poetry of Mona Kuhn’s nudes is on view at the Jackson Gallery (D9) and the Edwynn Houk Gallery (B22). More raw, the German Jürgen Teller (Suzanne Tarasieve, B14) is a fashion photographer who has injected a fresh aesthetics into the new-generation magazines such as The Face, i-D, and Dazed & Confused… Even more provocative are young drug users portrayed by Larry Clark who is known for capturing adolescents in sexually explicit scenes. Social outcasts viewed by Nan Goldin can be seen at the Fraenkel (B24) and Sage (C30) Galleries.

William S. Burroughs’s scrapbooks are showcased by the rare bookseller Chloé et Denis Ozanne (H5). The collages of notes, quotes, photos, journal excerpts by one of the leaders of the Beat Generation have been rarely shown to the public. They share a stand with the writer Michel Houellebecq’s series Before Landing, exhibited two years ago at the Pavillon Carré de Baudouin. The series is informed by the same obsessions evidenced in Houellebecq’s literary production: deindustrialization, rural areas, urban development, transport hubs… Robert Longo, at the In Camera Gallery (A13), emerged in the heydays of American pop art in the 1960s and 1970s. His Men in the Cities, dating to the early 1980s, is a series of portraits of friends staged in disjointed poses, retraced in graphite.

A sort of experimental forum, The Platform presents interviews with photography specialists. Featured guests include Alinka Echevarria, winner of the BMW residency. The magazine Provoke is the subject of a conference “Between Art and Politics in 1960s Japan.” The BAL is currently hosting an exhibition retracing the history of this cult magazine. A conversation with the curator Diane Dufour and several other guests focuses on the emergence of performance art in Japan in the 1960s. Next, Mathieu Orléan, the artistic advisor at the Cinémathèque française, will lead a discussion with film directors, artists, critics, and curators on the role of photography in cinema. Not to be missed: his interview with Jerry Schatzberg, a leading photographer and film maker of New Hollywood.

The Pencil of Culture: 10 Years of Photography Acquisitions at the Centre Pompidou

At the Grand Palais’ Salon d’Honneur, Beaubourg is showcasing a decade of photography acquisitions. One of the largest in Europe, the Centre Pompidou collection covers the history of modern and contemporary photography. The curators have selected works by forty photographers, including Brassaï, Richard Avedon, Valérie Belin, Marc Riboud, René Magritte, Man Ray, Brancusi, Maurice Tabard… Borrowing the title of the first book on the history of photography, The Pencil of Nature, the Centre Pompidou aims to show that photography does more than reproduce nature: it has become a benchmark of culture.

Of course, Paris Photo would not be the same without the core figures: Louis Faurer, Robert Frank, Lee Friedlander, Harry Gruyaert, Dennis Hopper, or André Kertész, and Man Ray… There is also an homage to Leila Alaoui, killed in 2016 at the Ouagadougou attacks, hosted by the Continua Gallery. And we mustn’t forget to visit the numerous publishers, who present their latest releases, as well as the adjacent stand featuring the books shortlisted for the three Aperture Foundation awards, to be announced Friday.