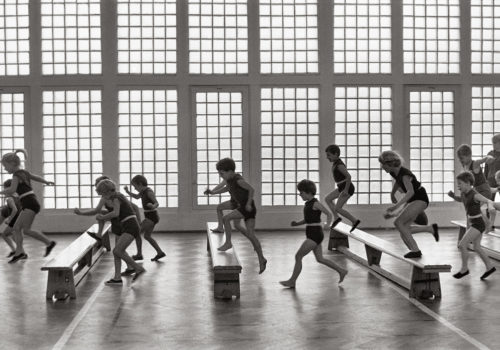 People, streets, holidays or days with nothing: whether Willy Ronis photographs old Paris or the new towns of East Germany, it is there, always, that his gaze stops.

Thus, when in 1967 the association “Franco-German exchanges” commissioned a report intended to promote France’s recognition of the GDR, it was “life above all” that he sought to restore. A committed humanist “with a heart to the left”, he witnessed modern socialism in the service of the people, bypassing the limits of the system.

Having traveled to the GDR in 1960, Ronis immediately knew where to look. When commissioned, he responded with photos of young workers, students, children playing, landscapes, ordinary moments … He also photographed the great painters, sculptors and writers and, as much as possible, the teaching of art, and the optical industry, which fascinated him.

Exhibited on his return in France in nearly eighty municipalities, this work then played its political and militant role, leaving art in the background for a time.

Freed from the context of the Cold War, these long-forgotten photos of Willy Ronis now reveal all their aesthetic and stylistic depth. And if their memory strength is undeniable, it does not detract from it; quite the contrary.

“I strive to include the human character in my shots, through the choice of gesture and attitude, out of concern for life.” Willy Ronis

Willy Ronis has rarely carried out work outside France, which, moreover, were not widely distributed. In 1967, he was assigned a reportage on the German Democratic Republic (GDR) which was exceptional  in his career. Already invited in 1960 to participate in a conference in East Berlin, he had discovered the GDR, Willy Ronis returned there twice in July and October 1967 in order to share his vision of the country with the French public. From his travels, he gave his sponsor, the Franco-German Exchange Association (EFA), a unique testimony of everyday East German life. The resulting exhibition was a double success for the association: presented in more than eighty French cities between 1968 and 1974, it participated in the international recognition of the GDR (1973).

Famous French humanist photographer, Willy Ronis (1910-2009) based his fame on his photographs of the popular districts of Paris. Known for his reportages on the working class and the social movements, or for his portraits of French regions, he has also devoted his career to fashion, advertising and industry commissions. In France, Willy Ronis has been awarded the highest honorary distinctions. During his lifetime, he donated his photographic work, which is part of the national cultural heritage, to the state.