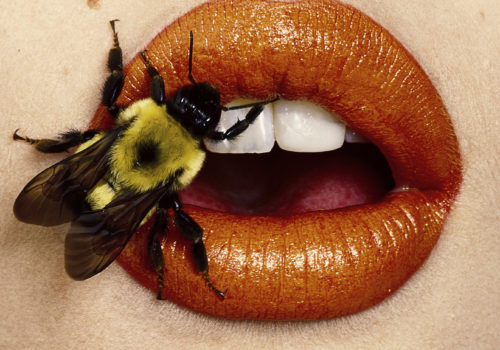 Pace Gallery presents Irving Penn: Photographism, an exhibition that brings together approximately 30 photographs, epitomizing Penn’s groundbreaking photographic style. Spanning from 1939 to the early 2000s, the featured works will be accompanied by rarely seen archival materials and preparatory sketches, which articulate the artist’s notion of “photographism.” The exhibition proposes that Penn coined this neologism to underscore his photography’s arresting clarity and reductivism, born out of his antihierarchical crosspollination of mediums. Organized in an unprecedented way, the exhibition will trace through its six distinct groupings of works the various artistic mediums and movements that shaped Penn’s practice. Photographism will take place on the third floor of 540 West 25th Street in Chelsea from January 8 – February 13, 2021.

Though trained as a painter, Penn began working in the 1940s as a photographer for high-fashion magazines, notably Vogue, one of the few sites where experimental photography could be exhibited at the time. By integrating the printed page but also distinguishing itself from this busy ground, Penn’s work radically modernized various genres of photos, from still life and portraiture to editorial fashion photography. His unique stylistic approach   or photographism consisted in a formal distillation that drew from the fine arts, such as drawing, painting, and sculpture, and the more commercial graphic arts, such as typography and graphic design. Early works included in the exhibition, such as The Tarot Reader (Jean Patchett & Bridget Tichenor) (1949) and Fish Made of Fish (1939), for example, point to the primacy of drawing in Penn’s compositional choices and formal effects. Other works, such as Two Miyake Warriors (B) (1998) and Issey Miyake Staircase Dress (1994), reveal the importance of architecture as well as choreographed art forms in Penn’s sustained collaboration with fashion designer Issey Miyake. Even the medium of photography itself is considered in Penn’s self-reflexive works, such as Bedside Lamp (2006) and Girl Behind Bottle (Jean Patchett) (1949).

Of his work, Penn stated, “What I yearn for as a photographer is someone who will connect the work of photographers to that of sculptors and painters of the past.” Irving Penn: Photographism answers this call. Eschewing chronology and the photographic series as organizing principles, the exhibition will break with conventional modes of exhibiting photography in order to emphasize the different mediums and art movements that inspired Penn’s work throughout his seven-decade career. In its juxtapositions of disparate works, the show echoes Penn’s own intermixing of his art as seen in his annotated sketches on photographism. The presentation will also be accompanied by a slideshow highlighting the breadth of Penn’s work, from posters and Vogue spreads to tear sheets and ad campaigns.

Works by Penn will additionally be featured in an upcoming group exhibition titled Modern Look: Photography and the American Magazine at the Jewish Museum in New York, on view from March 12 – July 11, 2021. The presentation will feature over 150 works including photographs, layouts, and cover designs examining the influences of designers and photographers such as Penn on visual culture from the 1930s to 1960, further emphasizing Penn’s role at the forefront of photography and graphic design during these decades.

Irving Penn (b. 1917, Plainfield, New Jersey; d. 2009, New York) studied design from 1934–38 with Alexey Brodovitch at the Philadelphia Museum School of Industrial Art. Following a year painting in Mexico, he returned to New York City and began working at Vogue magazine in 1943, where Alexander Liberman was art director.

Penn photographed for Vogue and commercial clients in America and abroad for nearly 70 years. Whether an innovative fashion image, striking portrait, or compelling still life, each of Penn’s pictures bears his trademark style of elegant aesthetic simplicity.

In addition to his editorial and advertising work, Penn was also a master printmaker. Beginning in 1964, he pioneered a complex technique for making platinum-palladium prints, a 19th century print process to which he applied 20th century materials.

The first retrospective of Penn’s work was organized by the Museum of Modern Art in New York in 1984. Following the landmark exhibition which travelled to over 14 countries after MoMA, he resumed painting and drawing as a full-fledged creative endeavor. Until his death in 2009, his innovative photographs continued to appear regularly in Vogue, and his studio was busy with assignments and experimental personal work.

Pace is a leading contemporary art gallery representing many of the most significant international artists and estates of the twentieth and twenty-first centuries.

Under the leadership of President and CEO Marc Glimcher, Pace is a vital force within the art world and plays a critical role in shaping the history, creation, and engagement with modern and contemporary art. Since its founding by Arne Glimcher in 1960, Pace has developed a distinguished legacy for vibrant and dedicated relationships with renowned artists. As the gallery enters its seventh decade, Pace’s mission continues to be inspired by a drive to support the world’s most influential and innovative artists and to share their visionary work with people around the world.