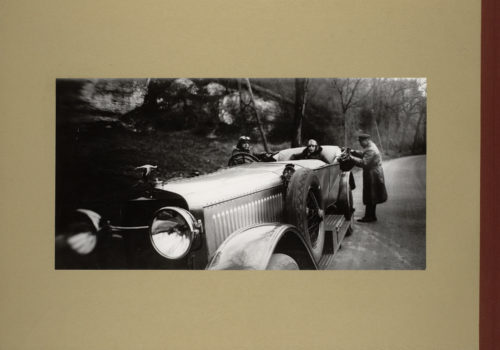 The recent uploading by the Donation Lartigue of the 126 main albums from the photographer’s collection kept at the Médiathèque de l’architecture et du patrimoine (MAP, Charenton-le-Pont) is an important step in the exhibition of ‘a work recognized late (1963). With forty thousand images taken from the end of the 19th century to the year 1986, the year of the photographer’s death, it is his photographic journal that unfolds, documenting his personal life, his photographic practices and finally, an artistic quest that was also fueled by painting and writing.

We thus discover, over the albums, in addition to the icons that helped to make him famous (Deformed Automobile – album of 1912 – Renée-Perle in the years 1930-1932 or photograph of the seven-year term of Valéry Giscard d’Estaing in 1974), how photography, which he will use a lot as a painter in the years 1920-1940, is primarily emotional, learned in a family environment and with friends and taken in contexts of high sociability. Passionate about the technical innovations of the second industrial revolution (aeronautics, automobile, cinema), he captures with accuracy and sometimes mischievousness, his immediate environment: family circle, socialites, sportsmen, artists (especially the world of photography from the 1970s ) but also more modest backgrounds. Very sensitive to images from the illustrated press, fashion and leisure magazines, exempted from military service during the two world wars, he easily appropriated the happiest side of the 20th century imagination (vacation, tourism, sports and leisure, highlighting the individual, importance of fashion and advertising, cinema, travel). His three wives (Bibi 1919-1928, Coco 1934-1940, Florette 1942-1986) and his most photogenic mistress provided him with models of incessant studies. But nature and its landscapes are also grounds for numerous experiments. Grace, first experienced as a moment to be grasped is also found in timeless “paintings”, as is his practice of painting and the technical qualities of his camera taught him to compose. Finally, also part of the repertoire he develops regions less familiar to him and less known to the general public of ruins or destitution.

If one will obviously regret not being able to approach these various and composite objects for sensitive qualities which disappear in the luminous flow of the screens, at least the tool will reveal, without comments, to those who will dedicate the necessary time, a more complex personality – richer too – than that sometimes demonstrated by the editorial choices made in the latter part of his life which left him wrongly restricted, to being a photographer of the Belle Epoque.

Juliette Dharmadhikari is in charge of the collection in the photography department of the Mediatheque of Architecture and Heritage. She has been working on the inventory of the Lartigue fund since 2017, in partnership with the Donation Lartigue. She was co-curator of the exhibition “40 years the Jacques-Henri Lartigue donation” at the Ministry of Culture in 2019. She implemented the photographer’s album page.

In 1979, Jacques-Henri Lartigue (1894-1986) signed the first of three deeds of donation and became the first French photographer to donate all of his work to the State. He entrusts its management to the association friends of Jacques-Henri Lartigue (AAJHL), known as Donation Lartigue, with which the Mediatheque of Architecture and Heritage (MAP), beneficiary of the fund, works on its conservation and its diffusion.

> 20 painted canvases, the rest of the painted work being bequeathed to the L’Isle-Adam museum (Val-d´Oise);

> all the manuscripts used for the publication of his three volumes of memoirs.

Upon her death in 2000, Florette Lartigue, the photographer’s last wife, donated the rest of her husband’s photographic archives to the AAJHL, further enriching this remarkable collection (drawings, personal papers, press quotes, albums and photographic collection. ). She also left her heritage to the Fondation de France which supports, through the Jacques-Henri Lartigue Foundation, the actions of the Donation and the initiatives of researchers and creators.