Nick Brandt : Inherit the Dust at Stockholm, Berlin and Paris 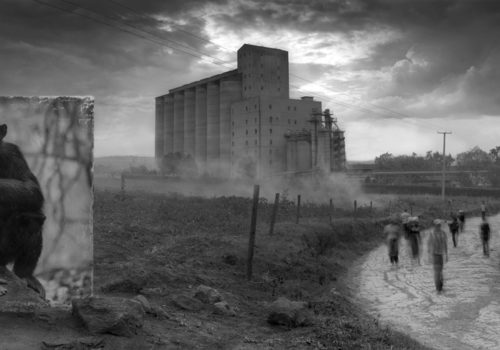 Many of Nick Brandt‘s photographs of African wildlife look like studio portraits, a Richard Avedon perhaps.  But they are not, they were taken in situ on African land with a patience born of love, and without a telephoto lens.  He used a Pentax 67 ll to photograph the animals and a Mamiya RZ67 Pro II for the onsite images in this series. There is no doubt that his photographs are, in his words, “achieved by one not so simple thing:  getting very, very close to the animals.”  His photos are exquisite depictions of animals and a way of life we may be on the brink of losing.

It is because his photographs are so beautiful, for which he has been criticized, that his new project takes on added meaning.  Now we see them amidst the environmental decay that is defacing the land and curtailing the ability of these animals to survive.

Life size panels of his photographs were glued to aluminum and plywood frames constructed on site and eventually placed in areas where animals used to roam freely but which are now covered in the detritus of contemporary life.  As human populations grow, and in Africa it is growing at the fastest rate, more and more space has to absorb the refuse that we produce.  For some, animals are expendable.

In an effort to ameliorate this fact Brandt works as hard as he does to bring his insight to a larger world.  His passion and concern has led to the co-founding with conservationist Richard Bonham of Big Life Foundation in an attempt to hold back the useless slaughter of animals for ivory and to protect whole ecosystems and all the animals within it.  They honor a holistic approach that supports the local communities through conservation as well.

The relentless killing of these animals also for bush meat, macho hunting or born of an anti-animal maliciousness will take a very high toll on what the world should honor and respect, and dare we say, care for.  It is the living reality of these animals that afford a sustainable income for those involved in the African Safari trade and should not be overlooked.  The human wildlife conflict is real and one of the biggest dilemmas facing all of us, in our attitudes and in our way of life.  How we care for the earth and all who live on it will determine the health and survival of our planet.  Brandt’s images are a strong reminder of what we stand to lose should we not meet the challenge.