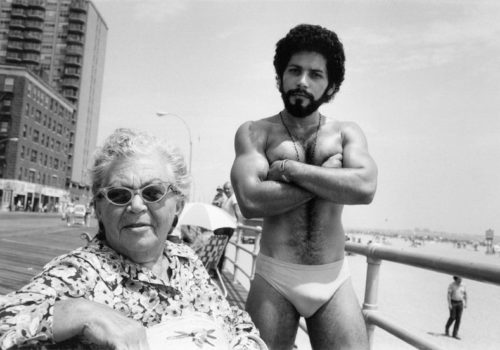 The gallery Les Douches presents New York, a group show including Berenice Abbott, Tom Arndt, Arlene Gottfried, Ernst Haas, Helen Levitt, Vivian Maier, Ray Metzker, Louis Stettner, and Sabine Weiss. Through a wide collection of photographs, the exhibition captures the spirit of this most fascinating city, each image possessing its own style. Whether they were born there, grew up there or even just regularly came to visit, each of the artists exhibited has a personal look, focusing on architecture, people, or on the hectic life of New York City.

New York was arguably the most photogenic city of the 20th century, or at least the city that most inspired this new art form. Photography was born and blossomed here, firstly in a purely artistic form using the modern city as its subject, just as a landscape might be celebrated by painters. It is the place where Alfred Stieglitz’s pictorialism originated, in a time before the easel tradition had become anchored in academicism or as part of the new impressionism, fauvism or cubism. Documentary photography however (whose evolution we can observe here in its infancy with Berenice Abbott or in its contemporary forms with Arlene Gottfried) came about against an altogether different backdrop.

New York, a city of immigrants and tensions between ethnic communities (Black, Jewish, Italian, Puerto Rican, Hispanic, White Protestant, Tamil…) scattered throughout the various neighborhoods of its five boroughs, has inspired its young people, often happier in the streets than at school, to learn the trade of photographer armed with just a simple Kodak box camera, capturing on film images from their own neighborhoods and from passers-by of various origins, all looking so different. They were often themselves the children of immigrants, who were born or grew up in one of these boroughs: Helen Levitt, Louis Stettner and Arlene Gottfried in Brooklyn, Weegee, born Arthur Fellig in one of the Jewish areas and Vivian Maier, the most European of all, in the Bronx.

In the context of the Great Depression and the poverty that New York experienced between 1930 and 1940, some of its young amateur photographers became politicized and joined the Photo League, a group who organized the New York photography scene, involving exhibitions, publications, a school and genuine documentary projects about the city in crisis, its streets and many neighborhoods such as Midtown Tunnel Queens, Pitt Street, Lower East Side, Chelsea, Park Avenue and especially Harlem which had become a black ghetto. Such itineraries around the city were thus created and followed up by several generations of photographers including the ones presented here. Four of them (Berenice Abbott, Helen Levitt, Weegee and Louis Stettner) belonged to this group for some time before going their own way to pursue more personal projects. Berenice Abbott stands out because of her artistic and cultural background (she met Eugene Atget in Paris and taught photography) and her project was to create an architectural inventory of an ever-changing New York.

With the newfound prosperity of 1941, the recognition of photography as a profession, the huge market of illustrated magazines and great museums embracing this new art form, New York photographers and foreigners who had come to New York gave a personal touch to their portraits of the city. Many photographers were involved, such was the appeal of a city which, since the early 20th century, had become iconic for the audacity of its architecture and the intense public life of its streets swarming with various communities resulting from incessant immigration.