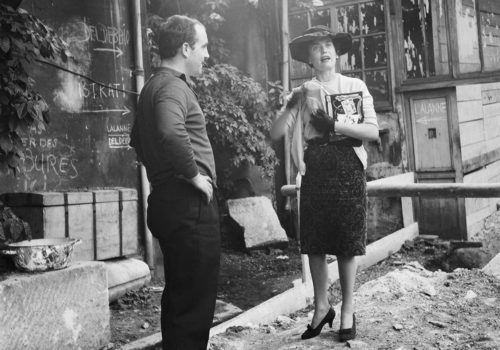 Impasse Ronsin, a dead-end street in the midst of Paris’s Montparnasse district, was a unique artists’ colony, known for more than a century as a place of art, contemplation, conversation, celebration, innovation, creation and destruction. With «Impasse Ronsin. Murder, Love and Art in the Heart of Paris», the Tinguely Museum devotes the first ever exhibition to this unusual urban network that was often in the headlines, presenting over SO artists with more than 200 works, all made at Impasse Ronsin. The place was marked by a broad range of diverse artistic identities that went far beyond the avant­ garde, with artists including Constantin Brancusi, Max Ernst, Marta Minujin, Eva Aeppli, Niki de Saint Phalle and Larry Rivers, through to Andre Almo Del Debbio and Alfred Laliberte. The exhibition layout is based on the original architectural plan of the colony, surprising visitors with an unprecedented mixture of artworks and stories that bring Paris to life as a melting pot and a cosmopolitan city of art.

Towards the end of the nineteenth century, a complex was built on Impasse Ronsin, in Paris’s 15th arrondissement, that extended existing buildings and provided studio space for 35 artists at a time. A broad range of practices came together: from a sculptor specialized in monuments, to amateur painters, to young avant-gardists exploring performance art.

Impasse Ronsin is known above all as the place where Brancusi lived and worked for four decades (his studio has been reconstructed outside the Centre Pompidou) and as the scene of the Affaire Steinheil, a mysterious crime of passion. The double murder, committed in 1908 in the only major formal building on the cul-de-sac, with its links to a salacious story about the death of French President Felix Faure almost a decade earlier, still fuels the legend surrounding the Impasse. It existed as a studio colony from around 1864 and came to an end in 1971 with the departure of the last artist, the sculptor Andre Almo Del Debbio, making way for the site to be built over with an extension to the adjacent Hospital Necker.

Impasse Ronsin was often romanticized, even more so after it ceased to exist. But this bohemian location was characterized by the unusual diversity of its artists and the complex interweaving of their life and work in a place that can be understood as a unique habitat.

The exhibition at the Tinguely Museum aims to reflect this diversity, presenting some 200 works by more than 50 artists, with an important part played by the exchanges between inhabitants and visitors to Impasse Ronsin. Artists like Marcel Duchamp, Max Ernst, Marta Minujin, Eva Aeppli, Niki de Saint Phalle, Daniel Spoerri, Larry Rivers and many others met in this place that was often described as shabby, dirty and precarious, but that also offered these artists the freedom to devote themselves unconditionally to their art.

It was in this oasis that Jean Tinguely had his first studio, from 1955, and where, in a creative frenzy, he quickly laid the foundations for his entire oeuvre: the Meta-Malevich and Meta-Kandinsky kinetic reliefs (some begun as early as 1954), early motorized wire sculptures like the Meta-Herbins, early kinetic sound sculptures like Mes etoiles, the first three writing machines of 1955, followed by a whole group in 1959, as well as his series of collaborations with Yves Klein. It was also here that he met Niki de Saint Phalle, and where he parted ways with Eva Aeppli, who had moved with him to Paris in 1952.

The exhibition features works by the following artists:

Among others, it is thanks to Christophe- Emmanuel del Debbio, the son of the colony’s last artist, that the exhibition’s curators, Adrian Dannatt and Andres Pardey, were able to present the history of Impasse Ronsin so comprehensively at the Tinguely Museum. For almost a decade, he has conducted in-depth studies into the history of the place where his father taught sculpture to students from around the world. He generously made available his huge archive of documents and photographs, and above all his research findings, as well as supporting the project with loans from his collection. This, along with loans from museums and private collections worldwide, made it possible to tell the story of the Impasse Ronsin using artworks, documents and original objects. An exhibition architecture based on the layout of the colony gives visitors the opportunity to rediscover this unusual art location in the heart of Paris.

The exhibition is co-curated by Adrian Dannatt and Museum Tinguely’s Vice-Director, Andres Pardey.

Impasse Ronsin. Murder, Love and Art in the Heart of Paris