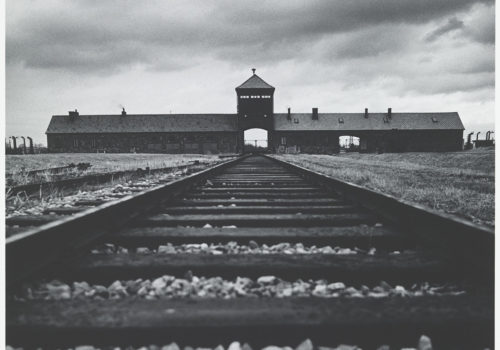 “It turned out that I would be photographing for about 12 years these concentration camps. I just have to photograph […], keep this memory alive, make documents of it.

My work is about memory.” Michael Kenna, décembre 2019

obviously in his own way, as anyone can.

Photographer Michael Kenna could only shoot with an aesthetic all his own.

How to photograph these places of horror, and transmit by presenting them differently? Michael Kenna faced this memory  and invited people to watch, to react, to enter into a subject, even by criticizing the chosen medium, to finally get involved and remember.

This is why Michael Kenna decided that this photographic work would never be marketed or distributed by an agency. Wishing to transmit to as many people as possible, thanks to this impressive collection, the memory of what we must transform into memory, he donated in the year 2000 to France 301 negatives and prints, which the Médiathèque de l’Architecture et du Patrimoine owns today.

As part of the exhibition Michael Kenna: Light from Shadows, Photographs of Nazi Camps, the National Resistance Museum is exhibiting 82 analog B/W prints, large and small, made by the artist himself and, echoing them, objects from the MRN collection created by deportees in Nazi concentration camps, as well as testimonies.

Michael Kenna is a photographer born in Widnes, England in 1953. During his first year at the London College of Printing, he discovered in a processing tray  a photograph of the Auschwitz-Birkenau camp taken by another student, that of a mountain of shaving brushes. The emotion was very strong for the young man whose first memory of his father was of him shaving. This resurfaced in 1986, in France, during a visit to the former Natzweiler-Struthof camp which marked him strongly. He then decided to develop a personal project on the memory of the Nazi camps.

The difficulty which then arose for him was not to profit from this work. His lens is not a hunter’s weapon, it is simply his memory tool. Michael Kenna undertook for more than 15 years, at his own expense, numerous trips to photograph the remains of the Nazi camps, which at the time were abandoned, all over Europe.

Seeking to transform his emotion into memory, he constructs step by step, photograph after photograph, a sober, intimate project, of which only those close to him were aware of.

At a time when the survivors and witnesses of the Deportation are becoming increasingly rare, is for him the time to transmit this memory, thanks to the art he masters, that of photography. To offer a look at these places where the Nazis tried to destroy our humanity was to help make oblivion impossible.

He went to Auschwitz-Birkenau and there he photographed the shaving brushes, which are now imposed on the viewer. The cliché itself becomes a trace that is added to the object: it reinforces its reality and reinforces its materiality. The image is also an object of memory.

Because he is a landscape photographer, Michael Kenna photographs the sites of the camps, bringing out the light from the shadows and claiming to approach the history and memory of the concentration camp universe and the genocide of the European  Jews in a different way. By working in black and white, by rigorous composition, by graphic clarity, it attracts the eye, arouses emotion and forces us to question what is and what was.

Looking at these places differently, he reminds us that the Nazi camps today have become vestiges that only partially account for their functioning during the Second World War. They are now places that we visit like museums or cemeteries, places where we want to learn, understand but also meditate. To look at the photographs of Michael Kenna’s camps today is to accompany him on his journey of memory, in his quest for history, perhaps for truth, and no doubt also for the sacred.

Michael Kenna: Light from the Shadows, photographs of the Nazi camps