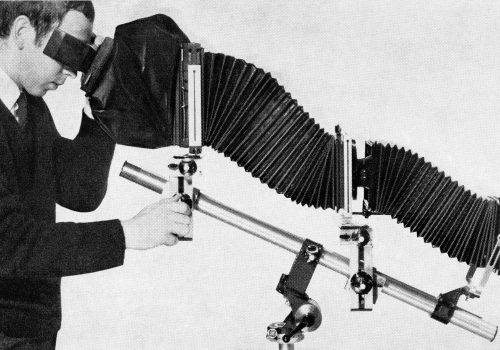 The Musée suisse de l’appareil photographique is teaming up with Festival Images Vevey to present the exhibition Holding the Camera by Alberto Vieceli. Between 2015 and 2019, the Zurich graphic designer collected more than 700 images in textbooks, flyers, brochures, photographic magazines. Most of these publications date from the 1950s and 1960s, some are more recent. These images have a didactic function. They show the ideal way to hold a camera, whether it’s as tiny as a spy Minox or as bulky as a large format Sinar camera.

Alberto Vieceli selected around 350 of these images from the book Holding the Camera, recently published by everyedition, the publishing house of the graphic designer and his partner Sebastian Cremers. He classified them according to criteria of position and attitude, compiling a documentary and unusual inventory of the best way to hold a device.

The transition from the book to the exhibition corresponds to an additional creative gesture. In the museum, Alberto Vieceli subverts his own typology to offer another arrangement, even more playful and unexpected.

This inventory has archival value, almost a repository of good gestures in the era of film photography. Alberto Vieceli certainly has the words of an expert graphic designer in the series, the accumulation, the variation on the same theme or the inverted point of view (the photographers are photographed here). Seen today, the images chosen are often funny and absurd. But they retain absolute relevance. They reveal the heart of the photographic act, an incomparable alliance of human beings and an optical machine.

Based in Zurich, Alberto Vieceli (1965) runs a graphic design studio with Sebastian Cremers. Both work mainly in the cultural field. Their portfolio includes books, graphic identities, videos, exhibitions or installations. Alberto Vieceli and Sebastian Cremers have won numerous Swiss and international awards, such as the Festival de Chaumont Design Graphique prize, the Swiss Design Award, the Jan Tschichold Prize or the Most Beautiful Swiss Books.

Why do you so stubbornly collect images that share a common motif?

The act of collecting allows you to condense or even compress a visual effect or an idea. My approach is similar to those of great models like Hans Peter Feldmann, Erik Kessels or Peter Piller. I work like this on different projects. Among others  books on postcards (Saluti dal Mare, OK OK, Animal Greetings from the UK), or in collaboration with Sebastian Cremers (Divisions of Pleasure) and Tania Prill (Money).

How did you come up with the theme of Holding the Camera?

It all started in 2015 with the Minox manual that I always have at home. I used this tiny device a lot in the 1980s. When I looked through the manual, I noticed a small picture where a person was showing how to hold the device. That is, someone who pretended to take a picture and was photographed herself for educational purposes. It immediately dawned on me that this was an unheard theme for a book, as far as I could find other similar images. After four years, I had collected around 700 images.

How did you classify your photographs?

It was a very long process, but little by little different groups emerged from this mass of images. At first there were classic topics like the horizontal or vertical position, the release from the waist, the chest or the arms stretched above the head. But little by little something strange happened: groups of images that normally do not exist in textbooks appeared. Like hidden faces, trigger with a closed eye or a camera being held without a photographer. These selections have become increasingly important. It allowed me to have a more specific point. The goal was to have 26 groups that matched the 26 letters of the alphabet. These letters were then used to catalog the images. And in the end, the chapter titles were harmonized with each other.

A proposal by Festival Images Vevey (September 5-27, 2020) in collaboration with the Musée suisse de l’appareil photographique.