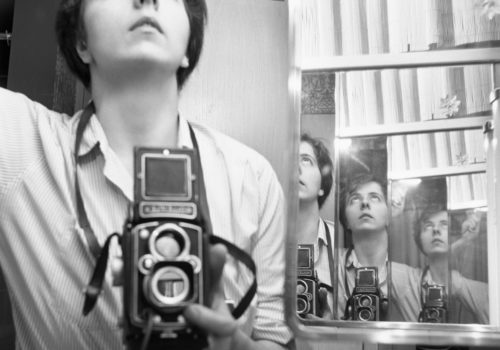 Vivian Maier was born in New York in 1926. Her father was of Austro-Hungarian origin and her mother was French, leading her to visit France several times during her youth. She began working as a children’s governess in 1951, first in New York, then until the 90s in Chicago, where she died in the spring of 2009.

Her entire life had gone unnoticed, until the 2007 discovery of her photographic corpus: an imposing, dense, luminous and brilliant body of work made up of more than 120,000 photographic images, Super 8 and 16mm films, various recordings, miscellaneous photographs and roll upon roll of undeveloped film – a treasure chest of fascinating finds. This passion of hers, which would become an almost daily activity, has today elevated her to the ranks of the greatest iconic street photographers and earned her a place in history alongside Diane Arbus, Robert Frank, Helen Levitt and Garry Winogrand.

Recurrent themes are found throughout Maier’s work, like weighting that balances out its overall architecture and establishes, right from her very first images, a vocabulary, a syntax, a language that she chose to tell the story of her time.

Scenes from the street, her preferred setting, and the working-class neighbourhoods where she encountered life, represent the principal theme of her work. Through her many portraits of strangers and people with whom she identified, granting them a fraction of a second of eternity as their eyes met, Maier captured a gesture, an expression, a situation or the grace found in small, accessible things.

There is also the world of children, her own world for such a long time, a place of freedom where time ceases to exist. She was fond of forms, rhythms, materials and objects found here and there on her strolls.

First in black and white, then from the Sixties with the musicality of colour, she played with the unique qualities of this new technique to bring variation to her photographic practice.

She dabbled in film, with her Super 8 or 16mm camera, as if in an attempt to no longer speed up time but to set it to the rhythm of her gaze. What Maier filmed was not a scene, but the movement of her eyes through a space, in search of a photographic image.

Maier “seized upon the life that was everywhere she looked. She grasped it in its smallest details; she observed it and followed it; she awaited it at the crossroads where it lingered; she overtook it as it ran, and wherever she may have been, she found it in all places equally great, equally powerful and overwhelming.”(1)

Central to the themes explored by Maier is a key issue that appears to have structured all of her work: her search for her own identity through her many self-portraits, of which there are multiple variations and types, becoming a language within language – a mise en abyme of the double.

The exhibition at the Musée du Luxembourg is built around these key themes.

Thanks to the invaluable support of the Estate of Vivian Maier with this exhibition, the public is given access for the very first time to previously-unseen archives belonging to the photographer. New scientific analyses will also be presented, highlighting several aspects of her work. Juxtapositions and connections are brought to light by these new perspectives: vintage photographs taken by Maier, Super 8 and 16mm films that have never been shown and that tell us about her search for the photographic image, and audio recordings that provide precious information about her practice.

Finally, original documents such as a hat, cameras, studio photographs from the end of the 19th century that belonged to her are presented, showing visitors her interests and potential influences on her work. The aim of this exhibition is to weave these elements together, thereby reconstructing and showing the public both the visible aspect of her work and its archaeology.

Exhibition organised by the Rmn – Grand Palais and diChroma photography, in collaboration with the John Maloof Collection, Chicago and the Howard Greenberg Gallery, NY.