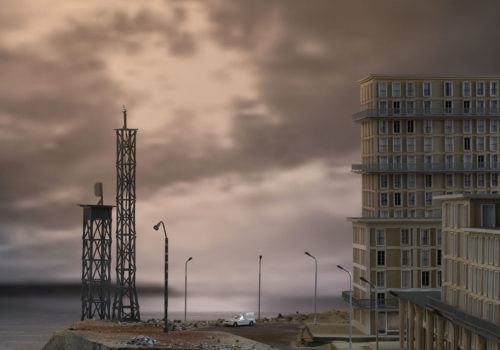 Since the Unesco classification of downtown Le Havre in 2005, the MuMa has welcomed around thirty French and foreign artists, photographers and videographers, to encourage and support the change in the way we look at this reconstructed city.

In this continuity, the museum invites this year Philippe De Gobert (1946, Brussels) for a large monographic exhibition which plunges us into the singular and poetic universe of an artist keen on modernist architecture. The course combines his own photographs and models with archival documents that reveal his references and inspirations. Du Havre, who has become a true icon of Reconstruction, Philippe De Gobert sketches another face, a sort of disturbing double, and reinvents the story of its rebirth.

Philippe De Gobert discovered Le Havre in the spring of 2018. He first walked there for a long time, gathering documentation on the work carried out by the architect Auguste Perret and his team to rebuild the city.

Back in his Brussels studio, and according to his usual modus operandi, he set about making models of buildings inspired by those seen in Le Havre. De Gobert builds models of buildings, he explains, “to understand how they work”. However, in the Le Havre series, the model is not an end, but a step in the process of developing the work: photography. The artist indeed photographs his models, sometimes from the inside, then reversing the movement which had led him to put the world in miniature, he executes large prints to find a scale specific to the landscape, integrating borrowed or artificial fragments from the reality.

This corpus, essentially made up of interior views or seaside landscapes, evokes an imaginary Le Havre, seized in the silence and the purity of its birth, empty, even if one distinguishes, here and there, the discreet signs. of a human presence.

Philippe De Gobert’s project gradually gained momentum. The first works that evoke a reconstructed city, the artist followed up in the form of an introductory narrative. Imagining the main stages of the reconstruction of Le Havre, but freeing himself from the constraints of truth, freely introducing anachronistic details, Philippe De Gobert reinvents a possible story in the form of a “photographic tale”. Abandoning black and white, these new photographs, bathed in twilight light, take on color. As if emerging from an already distant past, these images delve into our memories, summon others, those of a razed city from which will gradually emerge construction huts, makeshift lampposts, then lifting devices. and the first buildings. This historical reminder cannot be avoided, De Gobert seems to say. These images are necessary because they imply the immensity of the challenge to be met, thus underlining the epic dimension of this project. The presentation of this new Le Havre series therefore takes on a narrative aspect that the exhibition underlines while respecting chronological plausibility.

Philippe De Gobert imagined a final development. In the guise of a digression that takes the form of a long introduction, the artist reveals himself in what he calls “a self-portrait as an intaglio of his passions”. In a journey that combines models, documentary boards and photographs, De Gobert reveals “his very personal vision of architecture from the angle of the marvelous and the utopian” offering a “choice of milestones in the history of modern architecture. The sections of his imaginary museum thus emerge where, with the greatest freedom, and not without humor, icons of modern architecture and the most unbridled fantasies of brilliant tinkerers coexist. De Gobert affirms his “playful and poetic approach to architecture with its blunders and errors, seriously concocted by an artist, without the rigor that a scientist or an art historian would have applied to it”.

“The marvelous in architecture” becomes this long introduction which, embracing the very personal milestones of a history of architecture told by Philippe De Gobert, designates Le Havre de Perret as part of this imaginary museum. But for the first time, the breadth and profusion of the subject led the artist to develop a subject in the form of a narrative, the “photographic tale”, as a possible story of the rebirth of Le Havre.

By opening up his imagination and placing Le Havre within this personal and poetic pantheon, Philippe De Gobert re-enchants our vision of Le Havre.