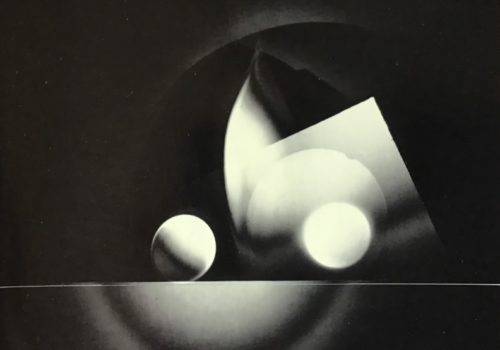 MMX Gallery presents ATO>MIC, an exhibition of unique Luminograms by Michael G Jackson, his second solo show in the gallery.

The “>” (greater-than sign) in the ato>mic title of the series is a link and the difference between larger and smaller scales of the artistic representation of miniature still life and the enormity of an atomic explosion. These two influencing ideas have inspired Jackson’s creative process.

Instead of using carving stone to depict the three-dimensional quality of sculptural works for example, he uses numerous camera-less techniques to combine scales and the real with the unreal. The canvas for the still life  is replaced here by photosensitive paper as he draws and paints using light in his darkroom studio.

At first glance the viewer may only see geometric spherical shapes with added lines and rectangles on tea toned Silver Gelatin paper. “The supremacy of pure artistic feeling” rather than the visual depiction of objects assigned to the art movement of Suprematism comes to one’s mind. Similarly, like the giant of abstract art Kasimir Malevich, Jackson wants the viewer to look further, deeper than one might usually.

The feeling of ‘sensation’ of the ATO>MIC prints, the sharpness of the forms, the intensity defying its size to condensed 9 x 7 inches’ paper, make it all the more dramatic to look at. It takes the viewer to another level of a fantastical world of creation.

The images may be reminiscent of the first milliseconds of atomic bomb explosions captured by Harold Edgerton’s Rapatronic camera in the early 1950s but also visualise the thought of Maholy-Nagy’s bold visions in the Bauhaus’s movement toward the idea of the Gesamtkunstwerk, or “total work of art.”

The 3D concepts that were first expanded in the same art movement by El Lissitzky a hundred years ago, are also explored here by Jackson’s drowned thin line within the third of the image. In his vision, the line reflects a shelf with the object on top, by adding weight to it, the gravity pushing them down.

Or maybe the thin line is just the horizon, where the enormous atomic blast took place…?

Beyond these flat forms of two dimensional ‘lumino-graphic’ works on paper, the purest form of photography (‘light drawing’) lays the visible path to the three-dimensional imaginary world, realised in precise composition, rhythm and warm earthy tones of the works.

It’s up to the viewer to decide what they prefer to see and take with them.

As Wassily Kandinsky once said; “Imagination is what allows your mind to discover.”

Michael G Jackson – (b.1966 in Wokingham, England) is an experimental photographer based in North Dorset, England. He studied art at West Dean College in Sussex, then apprenticed under landscape painter Christopher W Baker and later discovered his passion for photography. He moved away from working with traditional camera techniques in 2015 and is currently progressing the Luminogram process into new directions in which he has become regarded as a leading practitioner. In 2017 his luminogram work was added to the 21st Editions Collection and published by 21st Editions. The book ‘Flatland’ was premiered at the Grand Palais as part of Paris Photo Fair in 2018. His work has been exhibited internationally and is part of various private and museum collections including The National Art Gallery in Washington, USA and permanent collection of the University of Minnesota.