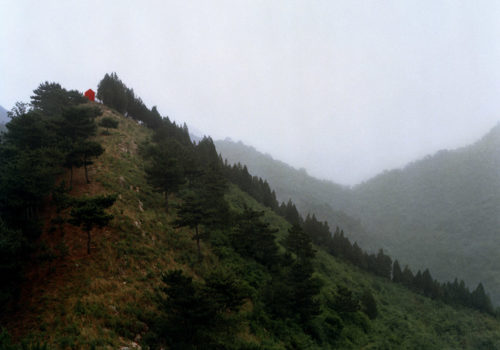 “If I were to ask to name the chief benefit of the house, I should say: the house shelters day-dreaming, the house protects the dreamer, the house allows one to dream in peace.”
– Gaston Bachelard, (The Poetics of Space, 1958)

Gaston Bachelard´s writings on his book Poetics of Space as well as Milla-Kariina Oja’s experiences living in China influenced the creation of her “Home-Project”. Born in 1976 in Oulu, Finland, Milla-Kariina has spent most of her adult life living in other spaces away from home. Studying photography at the Manchester Metropolitan University and later on at the University of Barcelona and then living in China for 4.5 years since 2006, she has constantly been redefining her space and her relationship to the different environments she’s placed in. Using a home symbolic to the individual, she fleshes out these different kinds of relationships in 14 universal and recognizable landscapes, shot in China and Finland, that aren’t meant to be culture-specific. In contrast to the bustling terrain that can be more easily found in China, pensive landscapes of solitude are evoked through her work.

Milla-Kariina’s work has been exhibited in China, Spain, Finland, Sweden, England and Italy.

How did you come up with the idea of “Home-Project”?
In 2006, I was trying to find open spaces to shoot. Buildings were going up right and left, and there were cars everywhere. Since it was so crowded in Beijing where I lived, I found myself going to parks and shooting at night to find open spaces.

Then, I started to think about one’s own space in their environment, and what that actually was. I wanted to find a universal symbol for it. And I decided to use a home since most individuals have a home where there’s a designated, individual space.

Can you explain the process of creating the scènes?
The project started in 2008 and took 2 years to complete.

The home in the project was depicted as a recognizable shape, something that a child would draw when learning to draw a house. This triangular roof-shaped house also happens to be a very typical form in Finland. Hence, a custom made, 2.2 meters high home was created. It was collapsible with a wood frame in which white or red fabric was sometimes used as the skin of the house.

Like with the house, the landscapes were deliberately made to be familiar and non-specific. They were both researched and randomly chosen. Some of them were spontaneously found during my travels. There were other scenes that were imagined like the desert, lake and mountain scenes where the landscapes needed to be researched. Although there were many scenes shot, they were deliberately edited to the 14 in the series.

Can you tell us about some memorable scènes?
The “Forest” scene is typical in Finland as the entire country is filled with forests. And many people dream of having a house on the lakeside by the forest. “Tundra”, the very bright and colorful scene and “Frozen Lake” were also shot in Finland.

The other scenes were shot in various places in China. The construction site in “Border of a City 2” was shot on the border of West Beijing.

The “Desert” scene is one of the most memorable ones. It was one of the most physically exhausting scenes to create because we had also created some video pieces to compliment it. Having much more equipment to carry and traveling through an endless landscape of loose sand wasn’t the easiest. Despite the large amount of energy needed to capture this scene, not an ounce of that was reflected in the end product. What was captured was the vast, enormous environment encasing the fragile house. It’s quite a peaceful feeling, and I like the contrast of the calm results from the struggle of producing it.

Can you explain why sometimes the houses are enclosed with fabric and at other times almost transparent?

Initially, I intended all the houses to be enclosed with fabric. The choice of using a light color and saturated color depended on the composition and color placement of the landscape. However, during the process of building the house in certain scenes, I began to notice that using the skeleton alone was also communicating another relationship with the environment and adding an enhancing visual characteristic. The movement of the frame in the landscapes was also intriguing. These choices of color and skin were made based on the overall composition, weather conditions and the mood of the scene.

How was it like living in China creating photographic art?
There is so much happening here that the city inspires you to create. It’s fascinating as you can easily start from one direction and return in a totally different direction with an unexpected end product. It is much more clear and straightforward when creating work in the west, but I will miss that surprising and energizing aspect about China.

Do you plan on continuing your series in other places?
That’s a possibility but it it’s not part of my immediate plans.

Moving back to Finland, I’m eager to get my feet more grounded into the west, experiencing Finland as an adult and exploring other ideas to express.

This interview was conducted and edited by CYJO.