Michèle Chomette: Somewhere in between 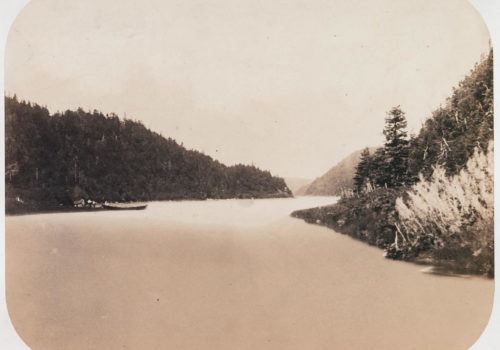 The exhibition is called “Hypotheses and drifting, with or without photography, 1850 – 2010”. Michèle Chomette’s unbridled taste for obscure themes and provocation is obvious.

Nevertheless, this Parisian gallery owner has, for more than 30 years, represented and tirelessly defended a unique branch of photography from her central location near the Pompidou Museum. Among the photographers presented here are Pierre Jahan, Adolf De Meyer, Jose Maria Sert, and Willy Zielke.

Somewhere in between is Pascal Amoyel and Nicolas Giraud’s response to a new invitation from Michèle Chomette. As a counterpoint – if not a diametrical contrast – to Intrusions, which was staged by the two curators at the start of 2010, this proposal moves outside the territory explored back then, bringing together the gallery’s historical collections and contemporary artists, along with contemporary works from elsewhere.

A rigorous construction of successive references, and convergences onto an essence of the photographic, is replaced by a more flexible form with a strongly-asserted character. And the vanishing points that were to be found in Robert Barry’s Inert Gas, 1969, and Lawrence Weiner’s statement Perhaps when reproduced, 1970, generate a dynamic that goes beyond the field of the image alone. Summoning up a state of instability of the photographic process, and seeking to observe how it spreads through space and shapes it, Somewhere in between sketches out, between works, a set of passages, cross-cuttings and exchanges that cast light on processes and hybrid objects located at the edge of the photographic, with respect to other practices.

In this fluctuating zone, the photographic conjures up boundary states, hollowing out surfaces, sinking to the bottom in a loss of equilibrium, and hovering at an uncertain tipping point. As an image in latency, or the fruit of chemical experimentations, works sometimes find themselves on the threshold of existence and visibility, if not legibility (François-Auguste Ravier, Christian Galzin, Bernar Venet). Elsewhere, it is in materiality that the photograph assumes a physical dimension – that of contact, a wrench, a cut (Eric Rondepierre, Henri Foucault, Isabelle Giovacchini). From matter to volume, the photographic circulates between one field and another, as for example with François Méchain, where the image is indispensable to the construction in situ of a sculpture in its completed state. Contrariwise, its presence in the image may diminish, or be evacuated, so as to make way, by inversion, for the artist’s own touch (Loïc Raguénès).

Piece against piece, from one substrate to another, by contact or at a distance, through the vacillation of the medium, uncertain territories and zones of exchange come progressively into being. Here, conduits for new hybridisations bring the spectator a panorama of changing contours in which the abstract achieves a footing in the concrete, and mental space resounds in physical space (Jean Pascal Princiaux). The crossing of these expanses discloses points of precarious equilibrium. Marine Hugonnier and Riwan Tromeur meet in their opposing trajectories across the Great North. A real space is carved out, while a void is embodied as a landscape. Works open onto several levels, sometimes contradictory, that evolve in locations of indeterminate status such as Rue Mallet-Stevens – a place of habitation, a film set and a “momentary site for experimentation in the photographic medium” (Charlotte Moth).

The accumulation of images, far from playing the reassuring role of the photographic “series”, joins in the vacillation, the surveying of this unstable territory. As to the inception of a possible kinetic jump (Eadweard Muybridge), or a changed frame of reference, or status, all the way to the archive and the printed work, the multiplication of images displaces their scope, increases their permeability, and supplies the outlines of intermediate zones such as the suburbs of Boise, photographed by David Lynch, or the surroundings of the gaming clubs that appear between the lines in Stephen Gill’s object-book. Here, the book is not a receptacle, but a machine that amplifies the volatility of the image and at the same time modifies our experience of it.
Like photography, it duplicates space, but in a different language. And in doing so it affirms the otherness of its identity, far from its intended role as trace or reference.

Object, sound and film initiate a dual relation to place, and create an extra dimension there (Charlotte Charbonnel, Hanna Hartman, Paulette Phillips), while text and painting (Mark Weiss, Andrew Grassie) question a space that is both mental and physical, like Adolf de Meyer’s photograph of a reproduction of an original photograph of a music room filled with scenes created by the mural painter José Maria Sert on the basis of photographic studies.

One after another, and Somewhere in between, these works operate together in their adopted medium, in what they show or hide, and in the principles, codes and theories they summon up or dislocate, with a call to redraw the maps of the photographic.