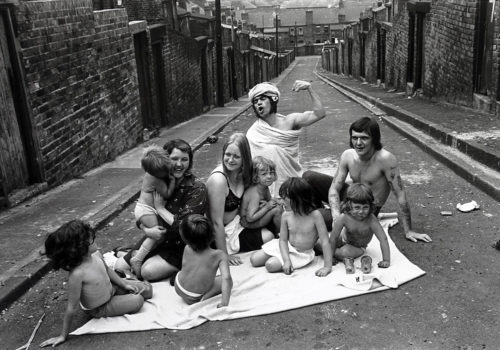 Sirkka-Liisa Konttinen is a Finnish photographer who has lived and worked in Britain since the 1960s. She was born in Finland in 1948 and came to study film in London in the 1960s, at the polytechnic in Regent Street. Together with some of her peers she founded the Amber Film and Photography Collective, with the purpose of creating and collecting work to represent marginalised communities and their disappearing landscapes. The group decided to move to Newcastle in 1969, to live and work in an industrial, working-class community. “We felt that the working class were not represented and if anything, were parodied rather than given a genuine voice,” Konttinen said.

Konttinen came upon the area Byker by chance, and immediately fell in love with it. This marked the beginning of her relationship with the local community there and the seminal photographs that she produced documenting local life over the next seven years. She was drawn to the laughter, the children playing in the streets, the energy. For her, this blue-collar district of Newcastle brimmed with life as it teetered on the brink of a huge cultural shift, a period when the shipyard industry collapsed and developers had eyes on the area for new housing schemes.

In her compelling hand-printed silver gelatin prints, row upon row of terraced houses sit on the hillside, an old man inspects his pigeons, a young woman applies make-up over the kitchen sink. Konttinen renders the people living in this sparse, urban landscape with a playful and intimate humanity. She chronicles much more than the culture of a single community in one northern English town; the images are evocative of a moment in time.

“People were baffled by my choice to live there. Not that many people had any idea where Finland was, but if they did, they thought it such a beautiful clean country, and why would I choose to come to Byker?”

“Newcastle was a stunning visual place to be in,” she says. Konttinen found herself in Byker by coincidence, but soon realised it was symbolic of the regeneration projects happening around Britain at the time. “It was never a slum, it was always a very proud community established over generations, and they wanted to stay that way. But the gap between demolition and the houses being built was sometimes many years, and people had to move out and never came back.”

“One way or another I had grown to be part of my street, and the community. It had been my first own home, and a real home for me. As my neighbour Nancy points out proudly: “When she first come into our street, she couldn’t tell ‘hello’ from ‘tarra’, and now she speaks Finnish with a Geordie accent!””

This sentiment is reflected in Konttinen’s intimate portraits of the people she encountered, whose trust she garnered through her honesty and compassion.

The resulting body of work, “Byker”, from street photography to composed portraits in people’s homes, finds a resilient and proud human spirit amid the outwardly modest living spaces. When the developers finally moved in, Konttinen moved on to other projects, but her photographs toured the world as social documentary and sublime compositions. This series has been described as being of “outstanding national value to the United Kingdom” by UNESCO.

In 1983, Konttinen published a book, Byker, and put together an exhibition that toured the world. She did not expect to ever return to Byker, but in 2004 she met someone who ran an education project there, who encouraged her to go back with her camera. Konttinen returned and shot new residents of the area;   this series of colour photographs is compiled in her book “Byker Revisited”, a series of colour photographs  published in 2009.