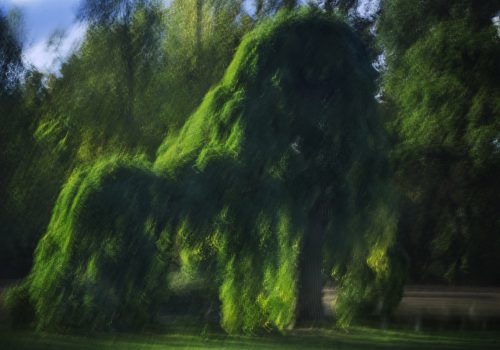 “Melisa Teo’s photographs reveal what the eye doesn’t even suspect. Trees radiate. They are crowned with radiation. They are enveloped by waves. One might call it diaphanous gossamer at times, or a pulsating veil; Melisa prefers ‘a vortex of energy’.” writes Sylvain Tesson in his foreword of a new book by Singaporean photographer Melisa Teo Les Arbres de Paris (The Trees of Paris), which is out in bookshops in France this week.

Photographs from the book are also presented as a solo exhibition at the gallery of the Alliance Française of Singapour as part of the Voilah! France Singapore Festival from now till December 19. Reserve your tickets for tours of the exhibition led by Melisa Teo here.

French is one of the languages where the word “culture” is used both for matters of the mind and of nature. This is evident in the dual love of Parisians for trees and gardens, as well as books.

But trees must struggle to survive in a city. The city is generally hostile to trees, yet, it would be nothing without them. What would a Haussmannian boulevard be without trees? What good would the Luxembourg Gardens serve if there were no chestnut trees? There would be no Paris without plane trees, lime trees and sophoras. Inhabiting an environment that is not natural to them, the trees of Paris, nevertheless emerge from the grind and grimness of city life, serene and tall, reaching for the light.

Just as trees need to be constantly cared for and tended to in order for them to grow in full glory, the human mind can unlock its full potential through constant learning. And trees do indeed resemble the mind as Voltaire famously wrote: “We must cultivate our garden.”

By turning her camera towards the trunks and leaves of trees rooted in Paris, Melisa looks for the spiritual link between man and nature. For this, the camera is needed: to recognise and retain what the eye doesn’t see – we can’t see the invisible, but we can photograph it. And by paying attention, we can learn from the most silent of beings living amongst us in this bustling capital.

Melisa Teo is a Singaporean photographer who regards her camera as a “third eye” which is guided by intuition to perceive a reality that eludes the naked eye. For her, the camera is a transmitter and translator of light’s messages and photography, a doorway bordering visible and invisible worlds. Since 2008, she has been travelling through spiritual worlds in pursuit of the sacred. Her journeys have been documented in a number of books (Light From Within, The Light Beyond) and exhibitions (Dark Light, Eden). In recent years, her fascination with the relationship between man and nature has led her from shamans in the forests of Siberia to anonymous figures in the manicured gardens of her adoptive city – Paris.

Sylvain Tesson’s books include Une vie à coucher dehors (‘A Life of Sleeping Outdoors’, Prix Goncourt for short stories), Consolations of the Forest: Alone in a Cabin in the Middle Taiga (Prix Médicis for non-fiction), Berezina (Prix des Hussards) and La Panthère des neiges (‘The Snow Leopard’, Prix Renaudot). His love of nature inspired him to address the subject of the trees of Paris with great joy.

The exhibition about this project in Singapore, at the Alliance Française de Singapour from now till Dec 19.

The exhibition is part of Voilah! France Singapore Festival organised by the Embassy of France in Singapore and supported by Air France.