Masterpieces from the Walther Collection No. 4 : “Octopus of a world” 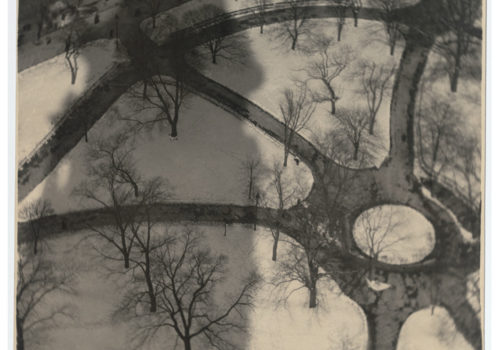 (4/5) Throughout the duration of the exhibition at the Jeu de Paume in Paris of the exceptional Walther collection bequeathed to Moma, L’Œil de la Photographie focuses on one masterpiece in particular. Today, urban suction pads.

Five dancing tentacles, as if carried away by the current of the cities, articulated especially since it has just snowed in this park and so we can more clearly distinguish its defined form.

We owe the photographer Alvin Langdon Coburn this title Octopus which immediately points to the strangeness of our human constructions when they begin to marry the design of nature, whether plants or animals, and the fantasy of a gaze that moves banality to a much wider field.

This point of view is only possible with the madness of grandeur of which the beginning of the twentieth century is the permanent demonstration, skyscrapers are growing at lightning speed in some large cities of the world and we will soon have the atomic bomb and the airliner, already have the submarine and the tank.

But then the photographer reminds us that the forms of the world before survive even in our wildest inventions. Animal names cover American hunters, plants inspire architects, and the large stones revered by our ancestors are being rediscovered by archaeologists who themselves are fueling humanity’s next innovations.

Coburn’s octopus is also a delicious snub to the apparent rigidity of things, where the eye sees in the most mundane an entrance to elsewhere. With this ambivalence for the cephalopod with the eight tentacles to be venerated in Greece for its wisdom, but also in many cultures to be the sign which one inscribes in front of a door towards hell.