Mare Mater by Patrick Zachmann at the Musée Nicéphore Niepce 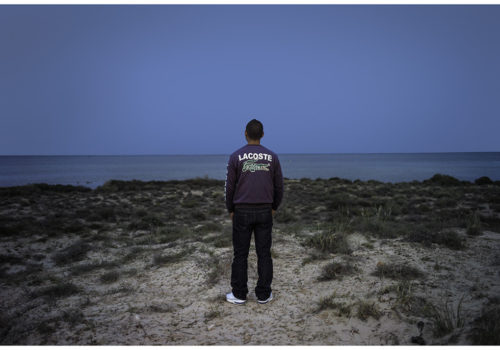 It consists of a journey, a voyage of memories and exiles,that weaves together the threads of all those destinies I encountered: those of the migrants who leave their countries on the southern shores of the Mediterranean, fleeing unemployment, boredom, the lack of a future; and of the women, the mothers, who let them go or discover they have already left. And for myself, I embark on a voyage to discover my mother’s roots, the ones she wants to forget.

This adventure that starts in Marseille and spreads over a period of two years led me to Issam, a young, undocumented Algerian migrant from Annaba who had arrived a few months previously and was already in a homeless shelter; then
to Nizar, an illegal Tunisian national that I met in the street just after his arrival from Lampedusa on a makeshift boat. They both tell the story of their journey but, above all, give the reasons for leaving home and, in their own way, how much they miss their mothers. The mother figure that is sacred in Judeo-Arab culture. Underneath, we find out that
in addition to poverty, they also fled a way of life, a sense of smothering, and perhaps even the mothers that adore them (perhaps too much?).
It’s the story of the Mediterranean, the story of the sea, the story of the mothers. Sometimes the sons don’t come back. Sometimes, the sons die at sea. There is also the dream, the fantasy. The dream of a Europe that will never be as beautiful, as welcoming, as rich, as  it seemed from the other shore.
I went there, where they come from, to try to understand, to meet their mothers and listen to the story of their sons’ departure, the wrench, the long separation. This project comes also from the certainty that in the near future, I too will have to face up to my definitive separation from my own mother who is old and ill. Her death will make it impossible to ever get any answers on the gaps in her life story. The mother-son separation for which I am preparing myself, resonates with the separation that these illegal immigrants that I have filmed and photographed experienced.
I started to ask my mother questions and filmed her. She was 90 years old and afflicted with the beginnings of Alzheimer’s disease and she didn’t remember much, especially the details of Algeria, but she did remember how eager she was to forget.
I didn’t have any photographs – an irony for a photographer – nor any accounts of the history of my mother’s Sephardic Jewish family. She wanted to forget Algeria, the poverty, to forget her origins. Today, I take the voyage in reverse.
I travel towards lost origins, the part that is missing, hidden, eliminated.
I am certain that I became a photographer in order to create a missing family album, both on my mother’s side and that of my father whose parents were deported to Auschwitz and Birkenau.
I need to make memories.
So this project is  a blend of the narrative of my difficult relationship with a mother that I wanted to escape from a very young age and that in a way
I have come back to in her dying days, and the perilous sea crossing of all these young migrants who leave their mothers worrying on the shores of their childhood. The connections between these two worlds reflect an examination of the basics of my work as a photographer and journalist, my relationship to time and memory and my never-ending quest for identity.
Mer (sea), mother, mare, mater… Yet again my photography echoes my own story and attempts to fill the gaps.