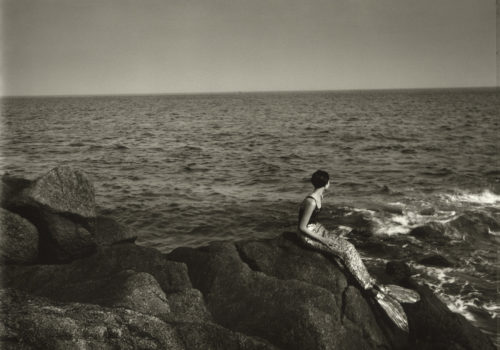 The new exhibition season of the Multimedia Art Museum, Moscow, which turns 25 this year, opens with ‘Elsewhere Is What Happens’, an exhibition by Sarah Moon. The museum has been collaborating with Sarah Moon since 1998, showcasing seven of her projects during this time.

The new exhibition ‘Elsewhere Is What Happens’ is presented by the museum in its anniversary year as a synopsis of the work of this remarkable French photographer and video artist. The exhibition includes iconic works by the artist, demonstrating all the diversity of her work: portraits, fashion photographs, the ‘Circus’ series, animal portraits, several projects based on Andersen’s classic fairy tales, still lifes, landscapes, industrial photography from recent years, etc.

Sarah Moon has worked extensively in Moscow, St. Petersburg and the Russian regions. A significant number of the Russian photos are included in the new exposition.

Sarah Moon says that films made her into a photographer: “If you dig deep enough, for me it was Sergei Eisenstein that revealed the power of the image and visual pictures. His films, the work of a real master, were a great inspiration long before I discovered photography…”

Sarah Moon’s works are visual poetry. “No landmark on that new land where I am adventuring somewhere beyond my daily life, beyond my boundaries. Walking up and down or sideways — out of balance — in a strange kind of excitement, mingled with anxiety — lost, yet present — grabbed by what I see. Strange drunkenness in this endless search between truth and fake — or let’s say Real and Imaginery — I go on trapped by the hour which changes the light — until it happens — just a second — this one which allows me to go through the looking glass — and then — only then, I can feel I am inside the world making it mine. A photograph.” (Sarah Moon).

Sarah Moon was born in 1941. In the 1960s she worked as a model (she is portrayed in the photographs of Helmut Newton, Guy Bourdin and other great photographers) and studied drawing. From 1967 she took up photography herself, first for glossy magazines like ‘Vogue’, ‘Harper’s Bazaar’ and ’ELLE’, then in advertising campaigns for Comme des Garçons, Chanel, Sonia Rykiel, Issey Miyake, etc.

Later on Sarah Moon began to work ‘for herself’, creating her own unique aesthetics based on Polaroid photographs which she gives the opportunity to age naturally before the artist endows them with a second life, emphasising the moment of chance, so important in life, and never accidental in Sarah Moon’s work. Since the 1980s Sarah Moon has created multimedia projects that combine cinema and photography.

Her films have received many prestigious awards at film festivals.

Sarah Moon’s large-scale retrospective ‘PasséPrésent’ was presented to great acclaim at the Museum of Modern Art in Paris from September 2020 to July 2021.