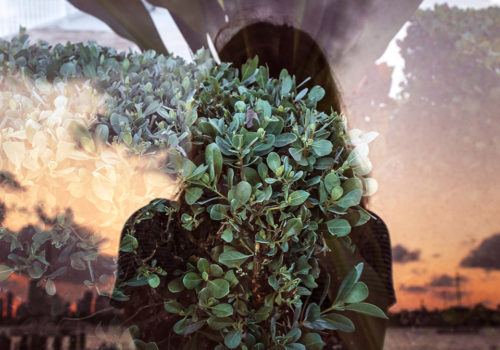 As part of the ‘Fashion and Style in Photography 2021’ biennale, the Multimedia Art Museum, Moscow presents ‘FloodZone’, an exhibition by Anastasia Samoylova.

Anastasia Samoylova relocated to the USA in 2008, and enrolled in a master’s programme at Bradley University after graduating from the Russian State University for the Humanities. For several years she lived in Illinois and Massachusetts and taught photography, then four years ago she moved to Miami, where she threw herself into creativity, completely devoting herself to photography.

Once in Miami, the first thing that Anastasia Samoylova noticed was the climate — tropical heat, almost one hundred per cent humidity, and seasonality — from July to September — showers, winds, thunderstorms and hurricanes. Historically the population of Florida always settled at a distance from water, knowing about the instability of ocean currents. Miami, founded in 1896, originally had a population of no more than 2000.

But with the advent of air conditioning the city began to actively develop as a resort and tourist centre, primarily in Miami Beach, a small island suburb separated from the coast by a man-made canal. The tourist boom led to a construction boom. Now it is one of the most famous resorts in the United States, with prestigious and expensive housing. Due to global warming the level of the world’s oceans is constantly rising and coastal areas of Miami are regularly flooded, but the authorities of the region, whose economy is based on tourism and development, continue to create the image of a tourist paradise with beautiful beaches, landscapes and hotels, despite the fact that over time this area risks being completely under water.

After moving to Miami, Anastasia Samoylova began photographing the city and its surroundings. With these images the ‘FloodZone’ project began, as a visual exploration of the amazing paradoxes, contradictions and contrasts that abound in South Florida. In the pictures of Anastasia Samoylova, Miami looks like a studio set: sun-faded advertisement banners inviting you to the city of dreams, skyscrapers and shacks with mould-eaten façades, the abundant, lush vegetation with roots gnawing away at the city, bright contrasting colours of the land and houses, and water, water, water… ‘Although we are surrounded by the ocean, there is almost no ocean in the photos. The water in these pictures comes to the streets and flows through them, as if through the veins of the city. It penetrates the walls, penetrates all the surfaces,’ says the photographer.

Photography theorist David Campany writes in his preface to the book ‘FloodZone’: ‘You will find no images of catastrophe on these pages. Anastasia Samoylova is looking for other things, the subtler signs of what awaits the populations that cluster along shorelines. What is it to live day-by-day on a climatic knife-edge? What psychological state does it demand?’

The project ‘FloodZone’ makes you take a sober look at things and think about responsibility. In this case about the responsibility of politicians and developers with their cheerful encouragement to settle in a ‘paradise’ that is defenceless before the natural elements. In a global sense, this is the responsibility of humanity to subsequent generations who may never see cities that have sunk underwater, animals and plants that have disappeared from the face of the earth due to global warming, climate change, etc.

Anastasia Samoylova (born in Moscow in 1984; lives in Miami) works in the field of observational photography and studio practice.

The ‘FloodZone’ project was supported by the South Arts Fellowship and the Michael P. Smith Fund for Documentary Photography. In September 2019 Steidl published a book of the same name with more than eighty photos. In January 2020 Anastasia Samoylova presented the ‘FloodZone’ series as part of a solo exhibition at the University of South Florida Contemporary Art Museum (Tampa).

Articles about Samoylova have appeared in publications such as: The New Yorker, Smithsonian Magazine, FOAM, Wired, Art Press, Monocle, The Wall Street Journal and Bloomberg Businessweek. As an invited artist she has lectured at the George Eastman Museum, the ParisPhoto, the School of Visual Arts in New York, etc. Anastasia Samoylova has also completed a number of artist residencies, including Latitude Chicago and the ArtCenter/South Florida.