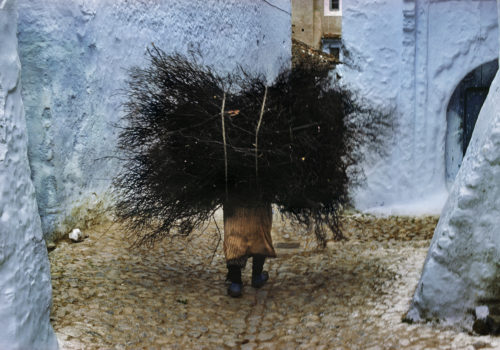 The Magnum Gallery presents MOROCCO, an exhibition of works by Belgian photographer and filmmaker Harry Gruyaert focusing on his extensive travels to the North African country of Morocco. Gruyaert’s first trip to the country marked his colour photography ‘epiphany’. Gruyaert joined Magnum Photos in 1982. The exhibition is presented until 2 April 2021 at the gallery and online.

While Gruyaert became fascinated by the power of colour when he first moved to Paris in the 1960s, and subsequently on his first trip to New York in 1968 where he saw the works of Pop artists Roy Lichtenstein and Robert Rauschenberg, his revelation that colour photography was his preferred medium came from his very first trip to Morocco in 1969. Reminiscent of artists Eugène Delacroix and Henri Matisse, this revelation had a long-lasting impact on Gruyaert’s oeuvre which he decided to entirely dedicate to colour photography.

The exhibition presented at the Magnum Gallery in Paris celebrates this realization and spotlights one of his most significant and poetic bodies of works, spanning 40 years of the artist’s work. During his many trips to Morocco,

Gruyaert developed a highly personal photographic language, revealing the essence of the colours, landscapes and people he saw and met.

“The first time I went to Morocco, it was love at first sight. Then, I went back to find some places again, to relive the initial emotion, and did this for almost forty years. What seduced me in the first place was the order of things and life in the countryside. There, there was a splendid balance of forms, colours, everyday gestures and nature. The importance of family, group, and religion also fascinated me. At least in the countryside, habit, custom prevail and signify what everyone are. I do not mean to say that Morocco is an immutable country, free from changes and contradictions, but simply that rural residents are still submitted to rules, secular or religious, that we lack in Europe.” Harry Gruyaert.

Gruyaert distinguished himself from his peers, particularly from the Humanist tradition carried on by photographers such as Henri Cartier-Bresson, by focusing as much on the environment as on the people inhabiting it. As he explained in his eponymous opus on Morocco, 2013, communication through photography implies “a visual set which includes people of course, but in the same way as walls, fabrics, animals, light, etc.”

“In this striking selection of works, draped silhouettes and faceless shadows cohabit in warm ochre surroundings. His intuitive approach allowed him to capture the feelings of pride and reserve inherent to Moroccan culture as seen in the opening work of the show, where we see the profile of a young woman in a region of the High Atlas mountains. Some women and men hid their faces with modesty while others turned their back on the stranger that he was. This reluctance to be photographed was enjoyable to him, as it illustrated Moroccans’ state of mind.” Samantha McCoy, Director of the Magnum Gallery and Curator of the exhibition said.

Travelling from the High Atlas to the desert, Gruyaert discovered a great variety of landscapes, architectures, and people. Documenting the rich culture of the country, his passion led him to publish two photobooks on the subject, respectively in 1990 and 2013.

Born in Belgium in 1941, Harry Gruyaert studied photography and film-making. He made a few films as director of photography for Flemish television before turning to colour photographs in his adopted Paris in the early 1960s.

By the end of the 1970s he had traveled to the United States, India, Egypt, Japan and Morocco. In the early 1970s, while living in London, he worked on a series of colour television screen shots which later became the “TV Shots” now part of the Centre Pompidou collections. Around the same period he also photographed his homeland and produced two books, “Made in Belgium” and “Roots.”

Among other important works, the two editions of “Rivages” (Edges), published in 2003, 2008, and 2018 are testimonies to Gruyaert’s mastery of different environments, with contrasting lights and colours. More recently, he published “East West” (2017), a quest for light and sensuality which led the artist to capture the colours of two very different worlds: the vibrant glitziness of Las Vegas and Los Angeles in 1982 and the austere restraint of Moscow in 1989, just before the fall of the Soviet Union. In 2019-2020, in addition to “Last Call”, Gruyaert released the books “Irish Summers” and “India”.

An exhibition of Gruyaert’s work was held at the Maison Européenne de la Photographie in Paris in 2015 as well as a major show at the FOMU in Antwerp in 2018. His work is in numerous museum collections including Centre Pompidou, Paris, France; David Roberts Art Foundation DRAF, London, UK; Harry Ransom Center, Austin, Texas, USA; Fondation d’entreprise Hermès, Paris, France; and the Tokyo Metropolitan Art Museum, Tokyo, Japan among others.

Magnum Photos represents some of the world’s most renowned photographers, maintaining its founding ideals and idiosyncratic mix of journalism, art and storytelling. Magnum photographers share a vision to chronicle world events, people, places and culture with a powerful narrative that defies convention, shatters the status quo, redefines history and transforms lives.

For nearly 70 years Magnum Photos has been providing the highest quality photographic content to an international client base of media, charities, publishers, brands and cultural institutions. The Magnum Photos library is a living archive updated regularly with new work from across the globe.

Magnum has documented most of the world’s major events and personalities since the 1930s; covering industry, society and people, places of interest, politics and news events, disasters and conflicts.

With presence in Paris, London and NY, Magnum Photos reaches a global audience and has established itself as the authentic, storytelling photographic brand. It remains loyal to its original values of uncompromising excellence, truth, respect and independence.

Josef Koudelka: Ruins concurrently runs at the Magnum Gallery in Paris. It is open from Monday to Friday, from 10am to 1pm and from 2pm to 6pm, and by appointment.