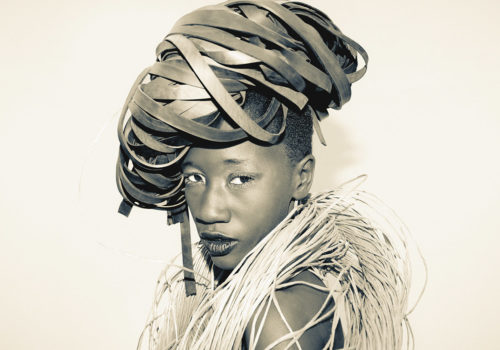 From March 6th to May 8th 2021 André Magnin hands Omar Victor Diop the reins of the gallery for an exhibition dedicated to the great African portraitists.

Heir of the African photography studio – whose codes are sometimes reinvested in his self-portrait – Omar Victor Diop selected for this Carte Blanche about fifty pictures from the photographers who influenced him. Mama Casset, Seydou Keiïta, Malick Sidibé, J.D.’Okhai Ojeikere, Jean Depara and Ambroise Ngaimoko (Studio 3Z/3C) encounter Omar Victor Diop’s dreamlike and colorful images. Through this journey made with historical pictures, the exhibition “HERITAGE” weaves the links between Omar Victor Diop’s work and the artistic legacy he is in line with.

The artist retains Jean Depara’s buzzing night outside Leopoldville during the independence years of the former country known as Belgian Congo. He also retains Ojeikere’s hairstyles whose memory work he admires.

Thereby Omar Victor Diop belongs to an African continent aware of its elders’ savoir-faire. He is also attached to an Africa in motion, full of hope and energy.

Among these reference photographers, it’s probably Malick Sidibé’s work that echoes the most in Diop’s approach. The fifty years between them are reduced by a shared impetus to continue the African photography studio’s tradition, and to show modern life’s trends, vitalities and evolutions. “Malick Sidibé shoots moments of truth, solemnity and dreams. He builds a mosaic made of little stories that get tangle up and melt into a single one – the story of his people. One day, I would like to hear those words about my work. To that extent, Malick Sidibé is a model” comments Omar Victor Diop.

Sidibé’s masters are also those of Diop. He admires Keïta’s observations on Malian society, and Mama Casset at whose place Diop’s grandfather made his portrait. Omar Victor Diop grew up in this atmosphere of the studio that has constantly nurtured his research. According to the photographer’s style, portraits and staging differ. Sidibé’s refined style is in contradiction with Diop’s more prolific portraits, but from the yéyé to the pop culture, each generation leaves to the next a precise and smart look on African beauty

Omar Victor Diop’s choices honor this art of portraits that glorifies a dynamical continent: from Mali in the sixties to contemporary Senegal, from black and white to colors. The photographers become the ambassadors of a vibrant Africa: ancestral and modern fabrics, emancipated and optimistic youth, male and female grandeur… With this Carte Blanche, André Magnin wants to “give the floor to the artists” and considers that “to promote contemporary African art means recognizing and valorizing talented artists”. Key moment of this early year 2021, “HERITAGE” highlights collections which are rarely under the spotlight. Historical works of art are reunited for the first time in order to show African photography’s vitality and beauty, whose great figures have been revealed by André Magnin since 1991. 30 years!

Lives and works in Dakar

Since his early days, Omar Victor Diop developed an interest for Photography and Design, essentially as a means to capture the diversity of modern African societies and lifestyles. The quick success of his first conceptual project fashion 2112 “Le Futur du beau”, which was featured at the Pan African Exhibition of the African Biennale of Photography of 2011 in Bamako (Rencontres de Bamako), encouraged him to end his career in Corporate Communications to dedicate himself to photography in 2012. Omar Victor lives in Dakar, his body of work includes Fine Arts and Fashion Photography as well as Advertising Photography. He enjoys mixing his photography with other forms of art, such as costume design, styling and creative writing. This is particularly visible in his series “Studio des Vanité” (2013), in which he follows his research between photography and design, with a strong influence of the historical African   portraitists.   His   series   entitled “Diaspora” (2014) is a time travel. A journey that takes its starting point in the present with the issue of immigration of African in Europe and their place in European society. Diop forces us to reconsider our perception of history by highlighting notable Africans living in Europe between the fifteenth and nineteenth century.

The integration of elements of football, weaves the links between past and present and question the position of African today. His latest series “Liberty” (2017) recalls, interprets and juxtaposes moments of this Black protest differentiated by time, geography or size, placing them in the same chronology, that of a frantic quest for freedom.