My encounter with Jimmy 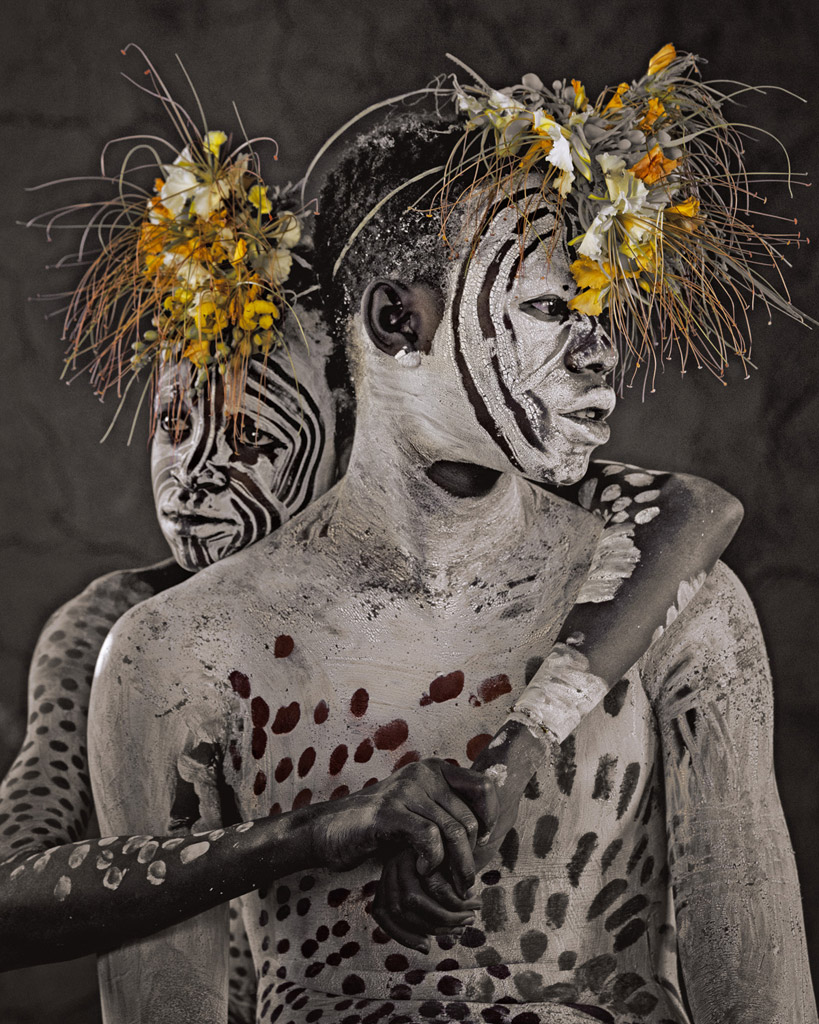 For at least two years  I wanted to exhibit Jimmy Nelson’s work. But, I’m not sure why, I was afraid that my clients, accustomed to more glamorous images, would find his work unapproachable. So I  waited, and, five months ago, just as I had decided to take the risk, to pick up the phone, and call him, I got an email from Jimmy’s office, saying, we’ve heard about you and your gallery, would you like to be our agent in France? Serendipity. Perfect timing.

When I contact an artist who lives abroad, we talk on the phone or communicate by email, and often don’t get to meet until they come to Paris for the exhibition opening. In Jimmy’s case, I felt like I needed to see him before the exhibition. That I needed to get to know the man before showing his work was crystal clear. And so in June I took a train to Amsterdam where the British artist resides.

Nelson grew up touring the world with his family of travelers. His father was a geologist working for an oil company, a job which required the family to regularly move from country to country.

At the age of 17, following a bout with malaria, Nelson lost all his hair (including eyebrows, etc.). His rebellious nature drove him to strike out on his own and head for Tibet. Because of his hairlessness, he was often taken for a Tibetan monk, especially once he decided to dress like they did! He spent a year there, and to make a living he acquired an old Russian camera with which he made a few reportages . These were his first photos. Then followed the tumultuous life of an adventurer which took him, still at a young age, to Afghanistan, Pakistan, Somalia, Iran, Guatemala, Yugoslavia, etc… He was a sort of a “Tintin journalist,” living from the images published in newspapers.

At 24, he met his future wife in Greece. Very directe, she said « You have one week to make money or I go with the neighbor ! » He decided to get motivated and expanded his photographic work, to advertising and lifestyle publications.

In the late 1990s, he got the idea of hitting the road again to photograph people who inhabit our planet. But it wasn’t until 2010, after he had met a Dutch businessman willing to finance him ($1,000,000), that he launched the project “Before They Pass Away,” which he described in the following terms: “It’s not a news report, or documentary work, rather it’s beauty, emotion, sharing. Images must be beautiful for people to be willing to look at them.” After five years of work, he had approached thirty-five indigenous communities and spent five weeks with each. His in-depth approach brought exceptional insights and raised questions, such as, how to relate to, get to know, be accepted by, and explain what photography is to someone who does not speak your language?

The result is stunning. Shot using 4×5 inch film, with a custom camera Nelson constructed himself, these portraits reveal the truth about the secluded peoples found in different corners of the world. The artist is unabashed: his images are edited, posed, the models are dressed, combed, arranged, but with their own clothes, their own jewelry…

Nevertheless, some critics reproach him  a certain lack of truthfulness. But the beauty of his subjects is very important to Jimmy Nelson. All his life he saw reporters photograph the daily life of indigenous cultures, often showing them dirty, disheveled, covered in dust… Instead, he wanted to show their beauty!

Since the publication of his book, Jimmy Nelson has been invited to speak at numerous conferences. Most recently, it’s the Nobel Foundation that sought him out. Twenty-five museums expressed the desire to show his work over the next five years. A film about Jimmy is in production, as well as a series of broadcasts comparing our society to those he encountered. He adds: “I am not an anthropologist, I have no qualifications, but I have field experience. One day, I showed the world map to 80 anthropologists. None of them had gone where I went. Their knowledge of anthropology is acquired in libraries. Mine is acquired among the tribes, in the field, I’ve met them in person.”