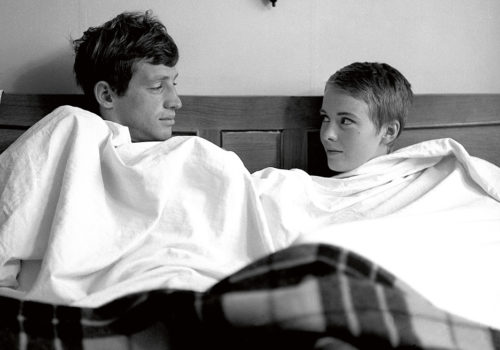 One of the most influential and innovative film-set photographers of his day, Raymond Cauchetier was for many years the unacknowledged genius behind some of the most iconic images of 1960s French cinema. Following a sustained campaign his work is now finally recognised, and this month sees a double bill for Cauchetier fans with the opening of an exhibition of previously never before published photographs at James Hyman Gallery [www.jameshymangaller.com] in London and the publication of a new monograph of his work.

Philippe Garner, co-author of Raymond Cauchetier’s New Wave, reviews here, in an extract from his essay for the book, the emergence of this movement that injected a new vitality into film-making – and the vital part that Cauchetier’s work played.

Raymond Cauchetier was already an experienced photographer when, at the tail end of the 1950s, a serendipitous set of circumstances gave him an opportunity – perfectly matched to his skills and to his sensibility – to make the still images that would define the essential spirit of a new generation of film-making in France. His evocative photo-document of the Nouvelle Vague (New Wave), made between 1959 and 1968, includes a number of photographs that have long been appreciated as emblematic of this dynamic, experimental era – the most celebrated surely his study of Jean-Paul Belmondo and Jean Seberg strolling down the Champs Elysées, caught on film with a seemingly effortless spontaneity during the shooting in 1959 of À Bout de Souffle (Breathless).

If one film Director above all represented the frustrations and concerns of this moment, it was surely Jean-Luc Godard, a combative former film critic whose first production, À Bout de Souffle, made its mark as a radical redrafting of the rules of film-making, an adrenaline shot to an industry locked within its conventions.

Cauchetier had returned, in 1957, from a long sojourn in the Far East, where he had honed his skills as a photographer, learning a skill and carving out for himself a degree of autonomy within the restrictions of the military context. He tells of his photographic formation: ‘I invented my photography in tentative steps, supported by my Rolleiflex, which can be very forgiving of error… In Indo-China, I watched war photographers risk their lives, and sometimes lose them, in their endeavour to get closer to the truth, without any trickery or artificial lighting. I admired them and subconsciously took inspiration from them. I learned the importance of that critical moment described by Cartier-Bresson, who had not himself experienced the dangers of framing an image under the constant threat of a stray bullet. It was the experience acquired on the banks of the Mekong and during the battle of Dien Bien Phu that gave me a fresh angle on Jean-Luc Godard and Jean Seberg.’

On his return to France, Cauchetier sought work as a photojournalist. Turned down by Paris Match, he experienced the rejection of the outsider by the establishment, a situation that cast him for the eventual role he assumed with Godard, joining up with a provocateur to challenge the status quo. He found work with publisher Hubert Serra making photo-illustrations for the then-popular photo-romans – pulp fiction recounted as picture-stories that were book-form equivalents of cinematic storyboards. This introduced him to the world of the constructed, narrative image, a perfect preparation for the documentation of a film story-line. By the time of his introduction to Godard, he was well versed in the telling of a story in photographs, and he appreciated the often ambivalent interplay between the recording of fact and the creation of credible fictions.

It was Serra who introduced Cauchetier to film producer Georges de Beauregard and young cinematographer Raoul Coutard. De Beauregard in turn enlisted Cauchetier and Coutard to work with Godard on his first film project. Cauchetier subsequently collaborated with all those other innovators – among them Claude Chabrol, Jacques Demy, and François Truffaut – who led the Nouvelle Vague and claimed full creative independence for the film Director.

‘Jean-Luc Godard broke every rule,’ he explains. ‘ It was a revolution. For my part, I took my chances and reinvented film photography. I was asked not to make a reportage but classic set shots. But my objective was to show exceptional moments.’ ‘The Nouvelle Vague was born thanks to Ilford 400 ASA cine film,’ he recounts, which allowed for the opportunistic use of low light. Cauchetier showed a subtle emotional responsiveness to actors, Director and crew alike, catching his subjects unawares, ever sensitive to the expressive potential of their gestures, their body language and interactions.

Cauchetier was self-taught and self-determining, but he was also inevitably the product of his times. He was working in the decades that saw the emergence of a more fluid approach to photographic picture-making, the camera freed from the static limitations of the tripod – mobile, versatile, more immediate than ever before.

After a productive decade of engagement with the French film world, its visionaries, egotists, tensions and pretensions, Cauchetier felt he had exhausted the possibilities of the genre and walked away. He turned his attention and his camera in another direction – to the documentation of surviving traces of the Romanesque.

Through so many decades, he has doggedly maintained his independence of perspective and his freedom of manoeuvre. Today, in his mid-nineties, Raymond Cauchetier still displays the enthusiastic, ever-inquisitive approach to life that has marked a long, rich, and stubbornly single-minded career. One can but admire the tenacity with which he has protected the flame of his youthful curiosity and preserved that wilful freedom of spirit.