Lisetta Carmi : Merry voices in the dark : Photographs in Sardinia 1962–76 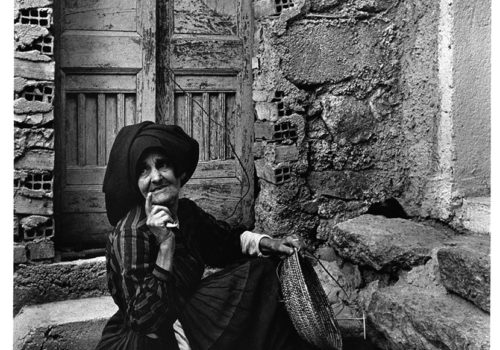 A major anthological exhibition dedicated to Lisetta Carmi is on at the MAN Museo d’Arte Provincia di Nuoro, in Sardinia. It shows an unpublished chapter of Lisetta Carmi’s photography, her work on this island, which is composed of hundreds of b&w images taken during her many visits (1962 to 1976).

On stage also an unseen series of colour slides showing the inland areas of Sardinia with its woods, rivers and lakes captured in their most evocative dimension, interpreted by Carmi’s sensitivity. Two more sections are dedicated to her work on transvestites (1965–71) and on the labourers in the port of Genoa (1964), thought to uncover the harsh working conditions.

The exhibition, curated by Luigi Fassi and Giovanni Battista Martini, is part of the MAN research on the relationship between major Italian photographers and Sardinia.

“Though the photographic work by Lisetta Carmi was discovered by the public in recent years, it’s considered a classic of Italian photography and it’s studied internationally at an ever-growing level of attention. Throughout her career as a photographer, Carmi especially documented conditions of existential marginality, by bearing witness of situations of subordination and discomfort with respectful participation and deep humanistic interest”, curator Fassi says.

“Lisetta Carmi doesn’t consider her camera a medium of capturing the aesthetics of the instant, but as a tool for the creation of a narrative flow by images, in which the human being and nature blend together. Starting from her own town, Genoa, Carmi went through the entire twentieth century, talking about workerism and the women world of work, always focusing on the marginalized and the least and with the urgency to give voice to those who could not be heard. She came into contact with Sardinia in the late 1950s, by following Maria Giacobbe’s column in Il Mondo magazine about her experiences as a primary school teacher in Orgosolo, later collected together and published as a book, Diario di una maestrina (1957).

Carmi’s relationship with Sardinia intensified progressively: she explored the world of Barbagia as a whole, its inhabitants, the role of women and working life. Interiors and exteriors, close-ups and perspectives, her focus was on people, testifying about her emotional engagement with the people she met, revealing how she managed to provide an in-depth interpretation of the anthropological world of Sardinia”, Luigi Fassi adds.

Lisetta Carmi also focused on the influence of music in the everyday life of local communities and on the persistence of rituals and traditions, as curator Giovanni Battista Martini notes in his text in the catalogue.

In 1976, Dalmine company commissioned her two photographic books dealing with the waters of Sardinia and Sicily. The one on Sardinia was never published, but there is a diary about that project, in which Carmi recorded this very photographic process step by step.

According to Fassi, “More than fifty years later we can observe the artist’s skill to tell the community life in the rural areas of the island with palpitating empathy though with a critical look, the changes of the territory, like the Costa Smeralda invention and the birth of international tourism, which has been developing since the mid-1960s”.

The exhibition is accompanied by a bilingual catalogue, with critical essays by Etienne Bernard, Nicoletta Leonardi, Giovanni Battista Martini and Luigi Fassi (published by Marsilio).

Lisetta Carmi. Merry voices in the dark. Photographs in Sardinia 1962–76