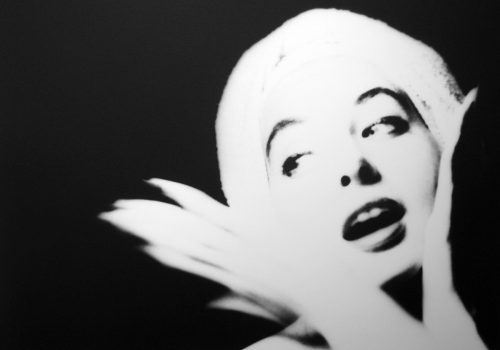 A solo exhibition of work by Lillian Bassman (1917-2012), renowned as a modernising force in post-war fashion photography, opens at Atlas Gallery on 27 February (until 18 April 2020). A fashion photographer at Harper’s Bazaar in the 1950s – 1970s, Bassman was famous for her high-contrast images of society women, actresses and models. Reworking early negatives in the 1990s, Bassman accentuated the stylised vision she had begun exploring in her early career, attracting a new wave of interest in her work. A selection of black and white photographs from both periods will be on display.

Bassman’s work was significant in emphasising the power of elegance, mystery and gesture in fashion. “[Lillian Bassman] makes visible that heart-breaking invisible place between appearance and the disappearance of things” (Richard Avedon). Her prints, developed in high contrast and carefully over-exposed, are abstract, luminous, soft yet captivatingly dramatic. The models become silhouettes, consumed by blankets of light and darkness; only the curve of an eye in profile, the gentle sweep of a jawline or a tiny nose peeping out from under a large hat give any indication of their features.

Bassman’s career in photography started under the guidance of legendary Alexey Brodovich (1898-1971), Art Director at Harper’s Bazaar. After being appointed co-art director of Junior Bazaar in 1945, Bassman’s images were published in Harper’s from 1950-65. At Harper’s, Bassman helped foster the careers of photographers Richard Avedon, Robert Frank, Arnold Newman and Louis Faurer. Bassman herself spent long hours in Harper’s darkroom developing and manipulating her images to achieve her signature style. She explained to one interviewer: “I tried to make my pictures soft and flowing. I was never interested in the straight print and I was trying out soft-focus effects by printing through tissue or gauze and vignetting with ferricyanide bleach.”

Bassmans’s prints are minimalist, with forms created by the natural lines and curves of the women. “The women who intrigued me [as models] had the most beautiful necks and the most responsive hand movements” (an aesthetic seen particularly in her photographs of Barbara Mullen). These simple gestures created harmony between the couture and the women, making movement between them seem effortless. Bassman acknowledged the influence of her education in graphics, textiles and painting: “At one point, I found El Greco, and that elongated look became my way of seeing.”

Bassman’s photographs offer an alternative vision of women in fashion. Bassman felt that women could relax with her and open up about their lives, “they never had to seduce me in the way they had to seduce men”. Her technique was to direct the model with ideals until they felt “engrossed with the mood that she feels alone”. And in this way, she photographed many of the most glamorous models of the time, including Suzy Parker, Barbara Mullen, Anne Saint Marie, Mary Jane Russell, Lisa Fonssagrives, Margie Cato, Carmen Dell’ Orefice, Barbara Curly and Betty Biehn.

In 1970, she took her leave from fashion industry, disillusioned by the new breed of ‘supermodels’ who dictated rather than took direction. However, in the 1990s she recovered a number of old negatives and made a series of ‘reinterpretations’ that took the expressionistic quality of her work to a new level. The success of Bassman’s ‘reinterpretations’ gained her commissions from the New York times magazine in 1996 and Vogue until 2004.

Atlas’s exhibition will coincide with one at the Musée des Arts Décoratifs in Paris, which will feature 150 years of fashion photography at Harper’s Bazaar magazine. Many of Bassman’s photographs will be included, paired with the original dresses from her shoots.

Atlas Gallery – Founded in 1994, Atlas Gallery is one of the leading international galleries dealing exclusively in photography. The gallery embraces photography in all its forms: from classic vintage photography, photojournalism and fashion to experimental and art photography.