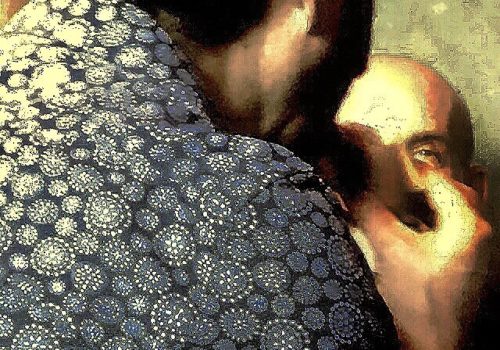 Les Mesnographies is the first free international outdoor photography festival in the Yvelines, this is their first edition.

…. there’s that tiny eye on the side of the smartphone that can pick up, grab and hold whatever it wants.

And what can be done with all this?

These are not the painted animals of prehistoric times, nor the traces of a hand, nor even graphs of railway tracks

So maybe an absurd and ridiculous accumulation that pretends to reassure.

Vanity … but nothing will stop you from disappearing.

How can one find oneself ?

How can one find an occupation or a hope there?

You can simply use this almost invisible little camera like a notepad.

Some kind of eye journal.

This is what he tried to do in 2016/2017 to thank the National Studio of Contemporary Arts (Le Fresnoy) for inviting him to accompany the work of young artists for a year.

Since then he can’t stop.

Every day he steals moments from reality.

It has truly become a journal where he writes down whatever catches his eye.

It remained to give a form and above all a substance to all this.

By acting against the incredible performance of the sensor, it has gradually transformed the smartphone (i phone SE) into a pocket laboratory.

By moving away from reality he has sometimes managed to get closer to what he actually saw, imagined or felt.

It has become a construction, an obsession and fun at the same time.

After studying in Brussels, he made a short stint as an assistant before becoming between 1969 and 1985 Director of photography on many short, medium and feature films including Les Valseuses, La femme du Gange, India song, Son nom de Venise… for which he received numerous distinctions at Cannes, at the Césars and in London. Listening to the film)makers, he seeks contrast, movement, between expressionism and a handheld camera. Then he moved on to directing with the film Camille Claudel. “His raison d’être is shadow,” Isabelle Adjani says of him. From the shadow he made the light exist ”. He  directed three others, Albert Souffre, passionately, and Jim at night. Author of numerous technical articles on cinema, host of conferences, he was also a lecturer at Paris III and founded a production house for advertising films. Bruno Nuytten became known as a photographer at the turn of the 2000s. His photography is an art of the moment: blurry portraits, abstract, evanescent images make up a singular work. His different images question the perception of reality and our retinal impressions. We find there the virtuosity of the filmmaker and his technical mastery of framing and light. The general public met him around his installation of 10 screens, “A Thousand Images for Le Fresnoy” in 2017, of which all the vertical images in 1.77 format, were taken with an iPhone.

In the Mesnuls municipal park