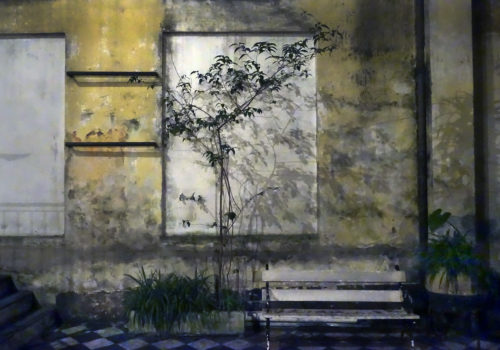 This is a series of photographs taken at night in the streets of La Boca, historic and mythical district of Buenos Aires. Images of deserted streets where an atmosphere of dreams reigns reminiscent of the melancholy of the tango born precisely in this district, the city’s founding port. These are also views of areas that have become dangerously frequentable that only a native of these neighborhoods, a connoisseur, can cross at night and photograph without too much trouble …

Views of a lonely walker in streets no tourist will ever see, let alone under the dim light of the candelabra.

Finally and above all, they are real images and not documents, because the description mentioned, in the geography guessed, is grafted an undeniable pictoriality, that is to say that the drawing of the streets is replaced by the very material of the night and tensions between warm and cold colors. What Manikis pushes to the extreme as was his journey to the confines of his night and his walk.

Images of streets of Buenos Aires exhibited in a booth in the street of Friborg, it is as if La Cabinerie was transformed into a point of intersection, as if the images ignored geography and its distances to become one. continuous imaginary journey …

The Swiss street that leads to La Cabinerie continues into the Argentinian street, or vice versa… The Moon and the Sun of both continents together at the same time!

What the author of his photographs says:

“By some special circumstance, suddenly my life turned into a long night. These are the photographs of that night during which I went out and these are also the photographs of my resilience, because from the first steps, images appeared that spoke to me of other worlds, distinct and richer than the frantic research. of a lost love.

My tear-soaked sight then morphed into an attentive gaze on the hidden places of the very neighborhood where I was born, where I grew up and where I live: the neighborhood of broken hearts, the absent, the dark waters and the dead ends … They fed me with endless images, I was able to capture some with my camera while others were lost in oblivion. But all of them made me discover that in the deepest night, behind the closing door, leaving the sky on the other side, enlightened life can spring up. So I realized that the night is an invention of man. From the first torch that lit up the first darkness, the human being has illuminated and shaped the face of the night.

La Cabinerie is a former telephone booth transformed into an art gallery and cabinet of curiosities. The first certainly and ideally located on a square in a residential area of ​​the old town of Friborg. It was one evening in April 2018 that the idea emerged. Alan Humerose, who will become the founder and director of this extraordinary space, discovered on his way home this telephone booth, in front of which he passed every day, without seeing it.

Turret of glass and light placed in the street, it exhibits and exhibits itself, both public and intimate, it attracts as it illuminates.