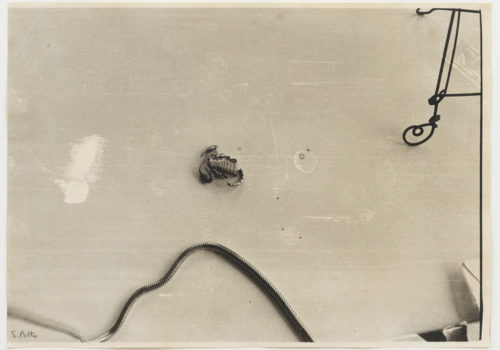 Ringing in the year 2022, Kicken Berlin is showing a selection of photographic works by Sigmar Polke in its Kaiserdamm, Berlin gallery in collaboration with Galerie Sies + Höke, Düsseldorf on the occasion of what would have been the artist’s eightieth birthday on February 13, 2021. Pieces from multiple groups of works represent the years from the 1960s through the 1990s.

As Swiss curator, author, and long-time companion of Polke, Bice Curiger, has said, photography played an integral role in Polke’s development of his work. Crossing boundaries, transformation, and continual research into new practices, as we can see in the rule-breaking process of capturing images and darkroom work, fundamentally define Polke’s oeuvre.

Sigmar Polke was already practicing photography as an independent form of expression in his complex work. He was comfortable with the medium from an early age and used it for visual note-taking during his studies. His first cameras were a Rolleiflex and then a Leica, which reflects the different types of images he made, ranging from static scenes to dynamic interactions.

In the second half of the 1960s, photographic images were emerging from his everyday environment in Düsseldorf — in his home as well as his atelier — that had little to do with the traditional genre of photography or art more generally. The artist looked at quotidian objects — tableware, tools, toys, potted plants — as though seeing them, through eye of the camera, for the first time.

The camera records ephemeral everyday sculptures, performative scenes, actions, and encounters. It shows the artist, his family, friends such as Blinky Palermo and others. In an early edition for Galerie René Block in 1968, Polke formulated in 14 photographs what would become his program for the years to come: Höhere Wesen befehlen…(pencil and watercolors on paper)

While the majority of the untitled early works show things and interiors, the photographs from the early 1970s took up the dynamics of exterior spaces. They were created during trips to Berlin, Paris, and foreign countries such as Pakistan, but also new quarters is rural Willich. The perspective is one of an erratic wanderer; the images seem almost incidental and snapped in the middle of the action, in direct interaction with people. At the core of these images is often Polke’s then partner Mariette Althaus. These are complemented by views of found objects and singled-out details, which he either illuminates or mysteriously darkens.

The artist’s focus is not a direct depiction of things but rather their transformation, which is continually driven by diverse experimental processes. Multiple exposures, crossfades, overexposure, solarisation, and effects from the darkroom at the hand of the developer and fixer come to the fore to flexibly create an image. Traces of the negative are enlarged or manually elevated on the print in order to emphasise them, the photographic silver gelatin print reworked with colored egg-white drawings.

With such darkroom experimentation and the changing substances and processes, the 1980s saw an increasingly alchemist drive in Polke’s photographic works. Each image became a unique work and often took on painterly abstract aspects. Polke turned his view now to the images of art history, such as Francisco de Goya’s Desastres or El Tiempo, or made his own work, like his participation in the Venice Biennial, the subject of an edition, which is comprised of only unique pieces. In the work Übermalung eines Bildes Winterlandschaft (Painting over a winter landscape), various artistic approaches converge together like different media: painting and photography, supposed documentation and recreation of an image, revealing and concealing.

The physical presence of the image’s subject, its material character, and its cultural context come to the fore in the 1990s. Crystal, gold, minerals, and metals are malleable and transmutable, shiny and translucent, with connotations reaching back to the mystical, one of Polke’s subjects of choice. Transparency and reflection, the effects of light, are also fundamental to the process of photography.

Sigmar Polke’s photographic images sharpen our eyes for images and their manipulation, for the exploration and explosion of genre-specific boundaries. His artistic practice is pioneering still today.