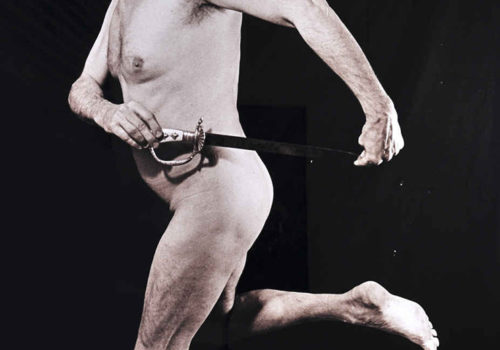 The circle of young Kharkiv photographers, which has been later described by researchers as the Kharkiv School of Photography, established itself in the 1970s in the Soviet city of Kharkiv. The activities of this circle were aimed at creating a visual opposition to the dominant Soviet narratives and the aesthetic canon of Socialist Realism, be it nude photography, decoration of the reality of the interpretation of historical events. Contrary to the utopian aesthetics of social realism, the Kharkiv School artists shot what was ignored or tabooed by the official narrative.

The Holodomor, despite the horrifying scale of the crime, was a blank page in Soviet history. It was forbidden to photograph starving people. The tradition of suppressing the Holodomor lasted almost as long as the Soviet empire. Boris Mikhailov, the founder of the Kharkiv School of Photography, comments on the lack of documentary evidence: “In the history of photography in our country, we have no photographs of the famine of the 1930s in Ukraine, when several million people died and corpses lay in the streets. We do not have photographs of the war, because journalists were forbidden to show the pictures of grief… The whole history of photography is ‘covered with dust’.” (Mikhailov B. Case History. Berlin ; Zurich ; New York : Scalo, 1999. Р. 7.)

Roman Pyatkovka, a representative of the second generation of the Kharkiv School of Photography, learned about the Holodomor from the samvydav (self-published underground leaflets). Impressed by the scale of the catastrophe and disturbed by the cynicism of its suppression, the artist started creating a dramatic pantheon of ghosts, which are not so much a representation of a particular man’s fate as a type, archetype, ghost drawn from the depths of the collective memory.

The opposite example of Soviet propaganda is the official heroic narrative of the Great Patriotic War, according to which World War II began in June 1941. Therefore, the Molotov-Ribbentrop Pact and the role of the USSR as Hitler’s temporary ally in the attack on Poland were excluded from it. There was no room for the post-war waves of famine and the Soviet occupation of Eastern Europe. All that remained was the history of the heroic struggle of the Soviet people against the enemy, where the figure of a Soviet soldier represented a hero struggling with absolute evil.

The reaction of the Kharkiv School of Photography to obsessive propaganda of victory was in the same form as their reaction to other manifestations of the official imposition of the state’s position. In the project If I Were a German, the Group of Immediate Reaction traditionally refer to the burlesque and dressing up in order to turn upside down the official historical narrative by means of carnival.

In the series of staged black-and-white photographs, we see the protagonist’s carefree pastime outdoors and indoors, surrounded by dogs, cats, and naked women. In terms of mood, these photographs are almost indistinguishable from the old works by these and other representatives of the Kharkiv School of Photography, with one difference. The protagonist of the series is dressed in the uniform of SS-man, and this conscious provocation completely changes the images’ register.

It is important to note that the project was created in 1994, when the empire no longer existed, and the room was cleared to create a new narrative that would be more sincere, inclusive. But all that the Kharkiv photographers, accustomed to being in opposition to the Soviet official canon, were able to create in this window of opportunities was another reproduction of their old protest performances.

Dialog with the symbols of the regime no longer existing will further repeat itself in the works of Kharkiv School artists. For example, with the pages of Soviet Photo magazine in a series of Roman Pyatkovka’s collages, created in 2012.