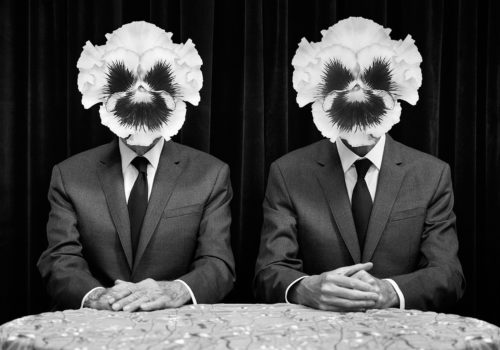 Today’s lesson is series of performative juxtapositions-focussing on 7 biblical texts that have been cited to condemn homosexuality.

The images referencing particular passages are balanced with interventions in which my husband Peter and I perform ideas of queerness.

Gay theologians have tried to re-contextualise biblical texts that condemn same sex relations in order to seek new meaning. The attempt to analyse historical convention is relevant, but it doesn’t diminish the fact that these words have been used to condemn, police and control a sector of the population as ‘other than’ normal.

In a secular society, religion is often cited as the reason for intolerance. But the French historian and philosopher Michel Foucault suggests that we must interrogate any historical convention “to discover who does the speaking, the positions and viewpoints from which they speak, the institutions which prompt people to speak about it and which store and distribute the things that are said” 1

Within this context we might define religion as one of the institutions. But if we then ask what purpose religion serves, and in whose interest (other than god) does it promote, then the “discursive fact”2 maintains patriarchal domination.

The tale of Lot and the men of Sodom is particularly illuminating when Lot offers his daughters to the men of Sodom to “abuse you them as it shall please you” rather than relinquishing the protection of his male guests. Theologians have explained this as a cultural custom respecting guests, but to surrender the protection of daughters in favour of male strangers tells us something about patriarchal codes.

Peter is from a time and place where to be an active homosexual as a young man would be ‘against the law’. The partial decriminalisation of homosexuality in 1967 in Britain was influenced by the Homosexual Law Reform Society which would later become the Campaign for Homosexual Equality. As an infant I was unaware of the change in law, but I still grew up in an environment where homosexuality was ‘the love that dare not speak its name’3

Before the word homosexual was introduced into language in 1869, same sex relations were usually discussed in terms of biblical references to places and acts namely sodomy, buggery committed by buggers and sodomites.

While it is argued that Károly Mária Benkert may have coined the term homosexual for positive reasons of providing an identity outside religious references, Foucault argues that this identity then became the focus of medical institutions, police and religion as a malady to focus ideas of normality and otherness. “The sodomite had been a temporary aberration; the homosexual was now a species”4

We have clearly come a long way in terms of western culture over the last 50 years in terms of rights for LGBTQ people. But one only has to look at the reversal of rights for women under the grip of religious subjugation in certain countries to realise, complacency is always a mistake.