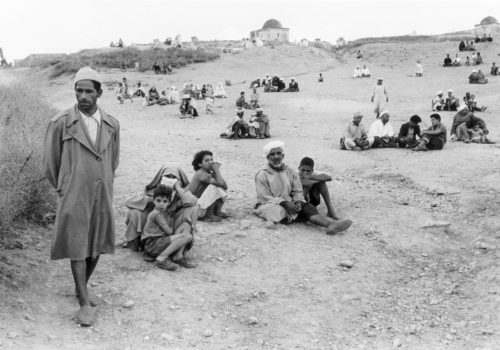 The book title of John Cohen’s photographs taken in Morocco in 1955, Look Up To The Moon, might suggest a wistfulness on his part but if so it is tangential to his interest in taking pictures of the country. He was twenty three and, influenced by Cartier-Bresson’s work, he was ‘motivated by the possibilities of my own vision’. In an introductory note, he says how ‘The camera led my way to images of a distant culture, along with the desire to represent what I could see and sense there, and not be distracted by chronology or thought’. It has taken sixty years for his pictures to be published but they have been worth waiting for.

Figures stand looking out to sea, or sit and converse with others; people make their way along stone passageways where shadows create a darkness irregularly broken by shafts of light; farmers thresh grain with teams of horses. An unmistakable terroir pervades the pictures, a habitat governed by habit and tradition, and to speak of a lifestyle seems too plastic a term for the daily activities that Cohen sees and senses.

Given the passage of time since he was in the country and the sense of a ‘distant culture’ that Cohen refers to, there is an inevitable ethnographic dimension to many of the scenes recorded: adults at leisure and work; children at play; the active Jewish communities (Morocco refused to hand over its Jews to Nazi demands) – but without that assumption of a disappearing way of life that often characterises ethnographic photography. There is something else that is absent and it serves to highlight the distinctive quality of the photographs he took. He is a White American in a French colony in North Africa but there is little sense of an imperialist or romanticized attitude in the way he uses his camera. The people being photographed do not appear as objectified, ‘othered’. They are not Orientalized or – so unlike Marcelin Flandrin’s photographs of Morocco in this regard – subject to a voyeuristic gaze. The sensuous, the imaginary or the nostalgic do not guide Cohen’s eye; his concern is more purely visual and spatial, responding to the play of light, the arrangement of shapes and movements of bodies.

In one of the larger pictures filling two pages, family groups and individuals sit around on the rough ground of a hillside. The scene is casual but pensive. It is not unusual to think of space as an empty receptacle wherein objects and people are placed and this idea gets into the picture but this particular space is a public one and Cohen has captured something collective. The light is low and uniform, uncharacteristic given the way chiaroscuro is at work in many of the other pictures, and this contributes to the sense of a shared serenity. If, figuratively, the people are looking up at the moon their bodies are literally on the ground. The viewer is looking at a Moroccan moment and is left to contemplate, like the man in the foreground who is standing by himself with hands behind his back.

Look Up At The Moon is a splendidly produced book. The 100 images (mostly black-and-white, some in colour) are given the space they deserve, most of them occupying a single page (24 x 32 cm) but others taking up two-page spreads. Cohen’s text explains how he was able to travel in relative safety at a time when Morocco’s fight for independence was heating up. ‘The spirit of revolt was everywhere’, he recalls in an evocative essay of remembrance at the end of the book. It is followed by some pages from his notebooks, for the month of August 1955: journeys recorded, expressions of affection for the country, political sympathy for the rebels, the sense that he is in a dangerous situation. ‘Funny! I could die!’ he jots down in capital letters one day– as if the thought has struck him for the first time.