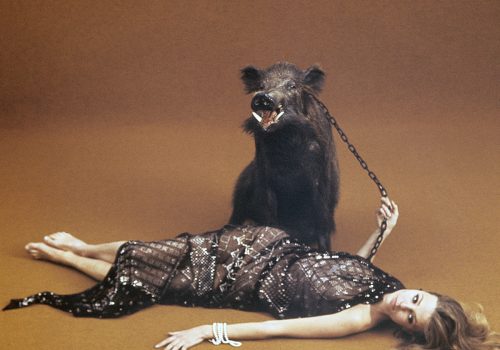 It is for this reason that the Jean-François Bauret fund joined the collections of the Nicéphore Niépce museum in 2016. After three years of inventory, digitization and studies by the museum’s teams, nothing comes to contradict two evidences: Jean-François Bauret is an advertising photographer and a prolix and transgressive fashion photographer; he is also an artist and portrait photographer fully inscribed in his time.

The archives of a rare extent and diversity, shows a photographer who can not be confined to two shots and a few series.

The exhibition “Jean-François Bauret: perceive, receive” offers a retrospective of the artist’s career in almost four hundred and fifty photographs. For the first time, the selection made from the four hundred thousand phototypes of the collection will present a joint rereading of his commissioned works and his artistic creations.

Sulphurous? Subversive? Modern? Precursor? Iconoclast? Complacent? Exhibiting Jean-François Bauret today is a challenge because if he were a photographer of his time, it would be difficult to imagine today to show some of his nudes if they were contemporary, even if it was they who did his success between 1970 and 2000.

Jean-François Bauret, like so many other photographers, is first and foremost a photographer. While the medium was in the midst of transformation, it affected almost all genres. He was able to combine professional practice and artistic ambitions by highlighting the latter to the point of having forgotten the commissioning work. But it is clear that his personal work represents only a tiny part of the fund.

His first photos are portraits of artists such as Bram van Velde, Pierre Alechinsky or André Lanskoy. Painters, sculptors and photographed musicians are all supported by Jean Bauret, his father, a Lorraine textile industrialist, patron and collector. These intimate, offbeat portraits are often produced in the artists’ studios. His attentive gaze and his sense of narration linked to his mastery of light make his portraits almost timeless.

But Bauret’s career truly began when he met interior designer and stylist Andrée Putman. She secured her first orders for L’Œil magazine and Prisunic stores. Fame and helping networks, the first advertising orders followed. Helped by his wife, Claude Bauret-Allard, painter and collector, both assistant and model, Jean-François Bauret participated in the revival of the genre. The compositions, inspired by Claude, hit the bull’s eye. The body [often that of Claude], backlit or blurred, had its place from the beginning. The poetry of the compositions softened the advertising coldness of articles as diverse as beauty products, sheets or spaghetti …

Bauret quickly became an established photographer, and suddenly gained visibility with two campaigns for Publicis that left their mark.

For the 1966-1967 campaign of Sélimaille, specialist in men’s underwear, Bauret imposed a naked man. For that of Materna in the spring of 1970, he photographs a naked pregnant woman and a little girl. The reactions are up to the audacity, never before had a man or a pregnant woman been shown entirely naked for advertising reasons.

Both campaigns are met with negative and violent reactions. They embody the profound change in advertising in the late 1960s, the importance taken by photography, the new use of body image to sell. They install Bauret as a subversive and provocative photographer.

We find in these two campaigns the real obsession of Jean-François Bauret: the naked portrait.

In the studio, on a neutral background, with controlled light, and frontal shots, the photographer offers an inventory of the bodies. “Beauty” is not a criterion of choice, the body is revealed without artifice, the best way for him to reach the psychology of the subject. Jean-François Bauret made his contribution for the revival of the portrait and the photographic nude, far from the academic poses of the XIXth century, with the daring framing of the New vision and sensuality troubled of some of his contemporaries.

While in the 1970s, Bauret exhibited his personal research and promoted his artistic works, he never gave up the hard working aspect of his activity.

It is obvious that the photographer marked his era. He has exhibited a lot [62 solo exhibitions and 57 collective exhibitions between 1956 and 2008], he shared his know-how with amateurs during numerous courses and workshops [41 listed between 1982 and 2005] and constantly participated in increasing the visibility of the medium. and to forge the public eye [creation of the site photography.com started in 1996].

This silent guy who turned into a talkative and tender clown in the studio has left a lot of photographs but few writings. What was Jean-François Bauret looking for? And was he even looking for anything?

Was photography a job for him or a pretext?

The profusion of his production leaves a feeling of unfinished business, of dissatisfaction to capture, an inability to tame as he would like this nudity which would be of the last abandonment.