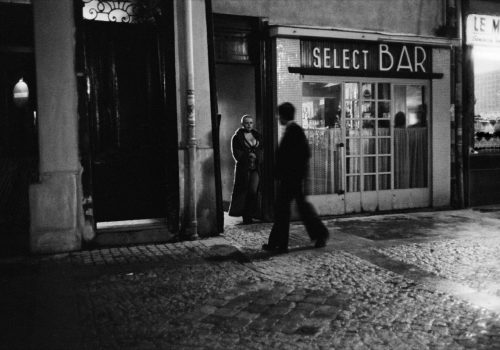 It all started like this, in 1976, with no experience and no pre-conceived notions. A world was there before her eyes, unknown, yet somehow familiar. She wanted to know and understand these men, women and transgenders who were selling their bodies on the streets of Paris.

In 1976, Jane Evelyn Atwood, not yet a photographer, had been living in Paris for almost five years. She bought her first ‘real” camera, and met Blondine, as well as the other prostitutes on the Rue des Lombards, in the Beaubourg neighborhood. Two years later, Blondine send her to Barbara, and then there’s Nouja, Miranda, Ingrid and all the others who lived and worked in Pigalle. Little by little, photo by photo, she managed to enter their lives and the world of prostitution. She created her first stories with images taken in the streets, the bars, and the seedy bedrooms of flop houses, bearing witness to the ordinary lives of those living on the margins of society. Without realizing it, Jane Evelyn Atwood was creating a first photo story that would be the very beginning of a remarkable and poignant body of work; work always provoked by those she meets and her desire and need to “capture human dignity”.

In 1976, Jane Evelyn Atwood met Blondine, a prostitute who worked as a prostitute at 19 Rue des Lombards, one of the notorious streets in Paris known for prostitution. A privileged friendship developed between the two women as Blondine revealed to Jane, slowly but surely, this unknown world. They remained close until Blondine’s death in 2013. As Atwood was earning her living at the Post Office by day, she spent every night, all night, for one year, with the prostitutes at 19 Rue des Lombards.

“The night felt familiar to me and the outside world seemed the stranger one. I was shy and introverted at the time, but that building became my world. The women were extraordinary…It was like being backstage for the first time, close enough to touch the magic. Blondine was the most impressive of all: with breasts so large you wanted to dive between them and a deep laugh that started as a rumble way inside. I wanted to know these women, and photographing them became the way to do that.”

It was through Blondine that Jane met Barbara, a transgender working the streets in Pigalle. “My relationship with the trans wasn’t quite the same as with Blondine and the prostitutes of the Rue des Lombards. Unlike the women, with whom I had real conversations, the trans were almost always out on drugs. Probably because of the drugs, their own relationships were perhaps more random, without the solidarity that seemed to exist on the Rue des Lombards. And they were more complicated, maybe because of the conundrum of being a woman born in a man’s body.

“When I photographed Pigalle in 1978-1979, I found a mix of prostitutes, transgenders, homeless people, neighborhood regulars, mom-and-pop businesses run by couples who lived right above the shop, and tourists.

Barbara was big, blonde, and almost always drunk. She hung out in a tiny bar, chez Sylvain. In the late morning, I’d see her hunched over, unshaven, in men’s pajamas. She ordered a double Ricard for breakfast. Later, she would put on the wig, the short skirt, the high heels. Each trans cultivates a unique personality; you see it in the way they dress. Raymonde and Caline were artists, in a cabaret show; Miranda, the provocative dark beauty, the femme fatale; Nouja, the feminist, the intello, with a sharp tongue and biting humor. Ingrid was The Star.

About two weeks before she killed herself, Ingrid let me photograph her naked. The photo is incredibly strange. Half her body is that of an extremely beautiful woman, with long, wavy red hair, and the other half, that of a man, with a truly magnificent penis. It looks like a photomontage. When you see it, you can’t believe it’s one and the same person. I remember when I first asked if I could photograph her nude, Ingrid said no. Then months later, she suddenly said I could do it. For me, this photo says everything about what she is all about. It’s the why of Ingrid. I’d been photographing the trans in Pigalle for just over a year when she committed suicide. With Ingrid’s death, I felt I’d come full circle in the story of their lives.”