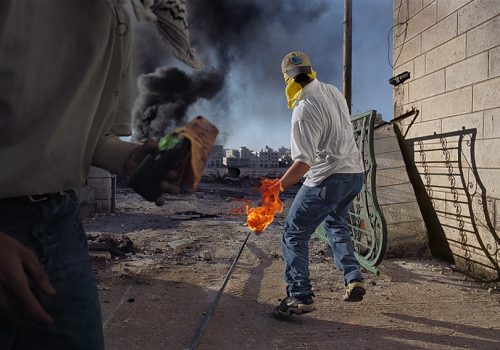 The American photographer goes where there is pain and death, creating images that acquired the status of icons. A vast retrospective at the Maison Européenne de la Photographie in Paris presents these captivating images.

Dead bodies piled in the bed of a dump truck that is about to tip over: the scene takes place in Bosnia-Herzegovina in the early 1990s at the height of the Balkan war. James Nachtwey photographed cadavers as they spilled out of the back of a truck while, in the left corner of the image, a hand was giving him a sign to step back. One might think the hand was also intended to cover up the horror, to block the lens and spoil the shot. However, as framed by Nachtwey, it only serves to better reveal the sordidness of the situation: it inserts a live element in a scene of death and separates those who are still alive from the bodies lying one on top of the other to be discarded in an open field.

On the edge of death: this is a leitmotif in Nachtwey’s work. From the beginning of the exhibition, we are transfixed by his tableaus in which human beings have a brush with the Grim Reaper or even become his victim. This is true of the first photos on display, which show the wounded and the dead being carried away by soldiers in South America (Nicaragua, Guatemala…). The outstretched arms of the victims bring to mind the deposition from the cross. Among Nachtwey’s photographs, there is always a composition that rises to the status of icon.

Nachtwey’s photography tackles war, death, as well as human suffering. In Africa, the photographer tracked the consequences of armed conflicts, revealing before our Westerners’ eyes sights that may be hard to bear. The exhibition includes in particular his series on the famine in Somalia and South Sudan in the 1990s. People reduced to skin and bones crawl on the ground, their mouths open, dying from starvation. The feeling of horror before these images is hard to put into words. “I do my best to make an impact on public opinion. To me, this is the goal of photojournalism: bringing people around serious subjects and making everyone more aware of the world,” says James Nachtwey. As a teenager in the 1960s, Nachtwey was marked by the media coverage of the Vietnam War and discovered the power of photojournalism to capture public opinion. “When people discover my photographs they must have a direct connection with those in the picture. It’s like an encounter,” he explains further.

What is really moving in James Nachtwey’s images is his ability to push photography to such limits that his whole life seems to hang in the balance. This is true for example of his images of September 11, 2001: the photographer literally throws himself into the debris and captures the despair of a fireman, his face covered with ashes. The same can be said of his incredible series of 60 photographs devoted to the war wounded, called by Alain Mingam, a friend of the photographer, “the Guernica of photography.” In 2006 James Nachtwey slipped among a team of military medics in Iraq as they attended to the wounded on an operating table. The sight of this scene is practically unbearable, but it awakens in us a deep sense of compassion. As the filmmaker Wim Wenders noted in his Speech for James Nachtwey: “[The photographer] creates a community between the subjects of his photographs and us. … He turns us into … common humanity. The word ‘compassion’ takes on its original meaning. … It doesn’t connote condescension or ‘pity’ … but real empathy, when the suffering of others becomes ours as well.”

The fact remains that the photographer has his method which intrigues and fascinates the viewers. How does he manage to always be at the right place at the right time? “This is his trade secret,” comments the exhibition curator Roberto Koch, adding: “One thing is certain: he is extremely dedicated and knows how to choose. He pays close attention to details and possesses what one could call ‘a visual instinct’.”

It’s this instinct that guides him as he aims his camera, which inevitably brings to light a moving tableau. His recent series devoted to migrants, exhibited at the Maison Européenne de la Photographie, includes many vibrant compositions. For example, a father crossing a river, carrying his daughter in his arms, bewildered at the thought of how far he has to go and by the dangers that lie ahead. Or the image of migrants using their life vests as prayer rugs on the shores of Lesbos in Greece. “Take time to look closely at these photographs,” advises James Nachtwey. “Immerse yourselves in the encounter with the people in front of you.”

Jean-Baptiste Gauvin is a Paris-based journalist, writer, and stage director.