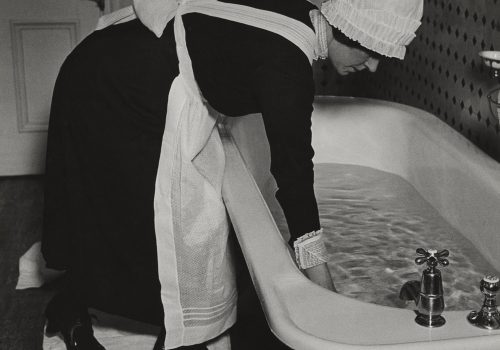 Opening in Paris of a new place dedicated to film photography in the Marais, 5 rue des Haudriettes.

In addition to a shared dark room fitted out to accommodate photographers, its owner, photographer Alexandre Arminjon has designed an exhibition space open to the street.

Jean-Baptiste Gauvin, who was one of the collaborators of the Eye of Photography, sent us this text.

The energy of a first song

The space is not immense, it does not have the colossal aspect that some museum rooms can have and yet, among the different proposals of the moment in Paris, it competes and even offers a breath of fresh air, the impression of seeing rare and unpublished photographs thanks to a carefully thought-out hanging.

Undoubtedly this selection of works, both similar and different on certain aesthetic levels, is one of the most beautiful blessings that this new place of the capital, located in the third arrondissement, ITHAQUE, a shared dark room dedicated to film photography and which has an exhibition space overlooking the street.

When we enter, to the right, first, we are struck by a form of panorama, seven photographs that speak so well to each other that we have the virtual certainty of unity. They each come from a particular collection and have the same chromatic aspect, they are filled with a powerful and deep chiaroscuro. Also, with the topics explored, there is something of the order of the sacred connecting them. Here a servant wearing an apron is preparing a bath. She is pictured by Bill Brandt. A banal act in itself, but ultimately beautiful in this banality, in the way that someone can devote themselves to the other, because we suspect, without being sure, that this bathtub awaits someone other than this servant. . Beside it, Ralph Gibson frames the Roman collar of a priest in a black shirt, emphasizing the duality between his religious authority, a form of political power, and the commitment to listen that his role implies. A little further on, Manuel Alvarez Bravo magnifies with his camera the two prominent breasts of a young woman, whose face cannot be seen, exactly as in the photograph of the priest. To mix thus the promise of the spiritual and the carnal temptation, without designating a face, is daring. But above all, it is possible to read this meeting as the meeting of inextricable ends of the world and which are completed by the following photographs: two tulips in a vase taken by Jérôme Soret possibly signifying duality or the tandem in love, three children with a dirty face and smeared with mud in the middle of a street fixed by Bill Brandt or two elegant women, one of whom literally shines like an icon, celebrated by Édouard Boubat.

On the left, the associations are different. The first photograph, the one facing outwards, visible from the street, is a contact sheet of thirty-two poses. It acts primarily as the oath that we will find here of film photography at a time when digital is omnipresent in the world. But it is also a deep moral questioning which invites the spectator to reflect when he learns about the subject represented and reads the text which completes it. This contact sheet by Jean-Philippe Charbonnier follows over a day the death sentence of a man who is accused of having collaborated with the Vichy regime and who is executed by a popular court at the end of the Second World War in France . In the image, nothing spares us. We see the man being shot by a group of armed individuals and we watch as his body falls before being placed in a coffin.

A photograph had to come next to soothe the mind. Claude Iverné’s is perfect. A pyramid in the middle of the Sudanese desert, the work of the black pharaohs, a massive block of dark stones that forms a monumental tomb and offers solace for his mortal condition by promising a way to eternity. The following photograph is a face in profile, that of a Nubian peasant, the deep wrinkles carved out by years of experience, the air of being immersed in a lively reflection, as if the photographer had succeeded in capturing this precious moment when the human being is buried in himself, turned towards his interiority and thinks precisely of his enigmatic condition.

Claude Iverné’s photographs also espouse an aesthetic that contrasts with the chiaroscuro opposite. A soft, warm gray that almost colors the images. An aesthetic linked to our time when black-and-white photography is perhaps further softened by this printing process, renewing the perpetual choice that presents itself to the photographer whether or not to use color.

Because this inaugural exhibition at ITHAQUE also has this virtue: to reveal the different choices of the pictorial material born from the photographic printing in black and white. On the side of the machines, the revealers, there are finally the photographs of Alexandre Arminjon, the creator of the place. Adept at various experiments in the darkroom, including the solarization of image, Alexandre exhibits these prints taken to a certain extreme. We will gladly stop at this representation of an ancient site on the island of Naxos in Greece where the solarization process used by Alexandre questions us about the abstract dimension of the motif and recalls the imbroglios of history, the thick manuscript ceaselessly covered with new sentences and erasures that seem to be the past and in particular the ancient Greek culture which had its role in the constitution of our European civilization. ITHAQUE, like a home port, like an island blessed by the gods, takes its name precisely from this original culture since it is also a refuge discovered by Ulysses in Homer’s Odyssey. A safe place that celebrates beauty. With this inaugural exhibition, ITHAQUE has in any case sung a first song which knows how to point out the splendor and the misery of human lives, in all their frantic races and their mysteries.