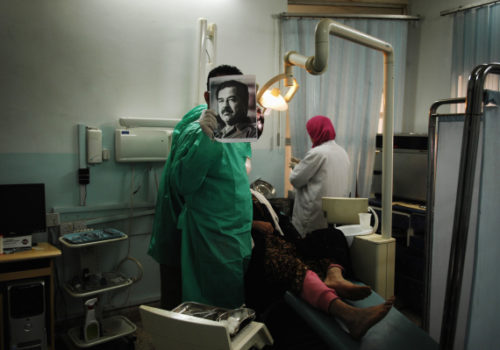 Photographer and filmmaker Jamal Penjweny lives and works in Salaymanya, in Iranian Kurdistan, where he was born in 1981. Since 2004 his photos of the Iraqi conflict have been widely published and the series Iraq is Flying has been exhibited all over the world. He graduated from the London Institute of Photography in 2008. His most recent documentaries, The Gun Market and Another Life, look at arms trafficking on the Iranian border.

“Saddam is here. The Iraqis can’t forget him, even now that he’s dead, because some of them still love him and others still fear him. He was a kind of god, at once cruel and generous. A good father, but a criminal too, who urged the Iraqis to kill and be killed at the same time. His shadow hangs over all of us. I’m a child of the war, like many Iraqis born early in the Iran-Iraq conﬂict; we were teenagers during the ﬁrst Gulf War, adults during the civil war in Kurdistan, and we got married during the American intervention. I became a photographer by accident: sculpture and painting led me to photography and photography led me to ﬁlmmaking. I don’t take photos on the spot: I’ve worked for the press a lot since 2003 and learned to make a distinction between photojournalism and photography. My ﬁrst pictures of Baghdad reﬂected fragments of reality, but later I opted for bringing these fragments together in more conceptual series. The result is the Saddam Is Here project. To explore the way Iraqis related to the dictator after the collapse of the regime, I carefully chose my characters, the backdrop and the combinations of colours. I asked Iraqis to hide their faces behind an oﬃcial portrait of Saddam Hussein: by making the portrait the guiding thread of my series I was trying to show how the Iraqis were still under the inﬂuence of his charisma. Saddam is here because he still permeates their way of thinking, acting, and relating to each other. But he’s also here because many other political leaders have taken his place; some of them were his bitterest opponents, but they are reproducing the same pattern of despotism. Decades of war and dictatorship have been the lot of ordinary Iraqis. Here I wanted to show them as the heroes of their own history.”