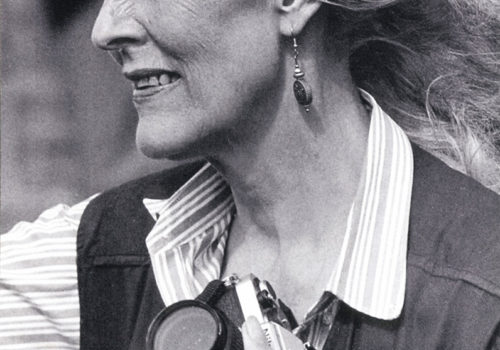 Our good friend Grace Robertson left us last week. She had a long and productive life and was full of life herself.

She was indeed from another era. It is hard to imagine that there was a time before streaming, before CNN, before even television  where people learnt  most about the world in which they lived from something called a ” Magazine “.

It seems so quaint and old fashioned now.

But many of the era’s greatest photographers  perfected  their craft  through their magazine assignments not to mention  made their living from them.

Grace worked for Picture Post Magazine  which is generally regarded as on a par with US  “Life” Magazine. It started publishing in 1937 and within two months  of beginning was selling 1,700,000 copies a week.

It spurned  many great photographers  like Bert Hardy and Thurston Hopkins who Grace met there and married.  .It ceased publication in 1957 when television usurped  it’s role.

Grace Robertson came from a journalist back ground.Her father Fyfe Robertson  was a well respected journalist who also wrote for “Picture Post”.  But photo journalism was very much a “boy’s club”. It was very hard,  almost impossible  for a female photographer to break in. In fact  Grace often submitted her photographs using a a man’s made up name  “Dick Muir”. She also told me she was so tired of getting rejected  and in frustration dressed up one day  as a man to try and get a job. She was 6’2” and could get away with it.

This was so many years before “Tootsie”, the celebrated  Dustin Hoffman movie.

But persevere she did and was often asked to produce” women’s stories”. Her most celebrated story was “Mother’s Pub Outing” . She had found a group  of working class women whose lives and community centered  around  a pub in a poor area of London. .Once a year they leave all the men behind and hire a bus , fill it with food and beer and head for the coast. As the day progressed they became more and more  filled with a sense of new found freedom and relief from their family responsibilities and more and more drunk! First shot for “Picture Post”  Grace was then asked to re shoot it for “Life” Magazine”. These images found a loving audience and defined her insight  and sensitivity.

She also  shot a very important story  “Women in Childbirth”  which the editor in the end refused to publish  for fear of offending of all people “Women” .

Back then especially in England things were so unenlightened.

When “Picture Post” folded she and her husband Thurston Hopkins set up their own small studio and did great creative work for appreciative clients before retiring to paint and draw and garden. Grace was so special to me. I think of her everyday.